It’s game day! Our partners has their first away game against Pittsburgh tonight. Good luck team!

Don’t forget to get your tickets for the next home game on May 29th!

We can’t wait to see you there!


History in the City of Akron begins today. Our first home match at Green Street Stadium, at St. Vincent-St. Mary High School of Akron. Tickets still available on www.akroncityfc.com. The pre-party kicks off at Rays Pub from 4p-6p, and the stadium gates will open one hour before the match, at 6p.

We had the best time at the first annual NIHF STEM Career Expo! It was so much fun telling the awesome 5th graders about digital animation!

Which department would you rather be the best boy for?

Let us know in the comments!

RPD is proud to be partnered with Akron City FC, and we’re super excited for their home opener May 14 at 7pm in Green Street Stadium!

Get your tickets NOW! ⚽️

Can you spot the fluffiest intern?

There's nothing more fun than being on location for a project!

Does your next video require going to a new location? Contact us on our website to see how RPD can help!

Get to know our RPD team!

Can you guess which movies the tattoos are from?

RPD takes on cryo curing! Check out some behind the scenes photos of prepping flower for Cryo Cure’s brand new machine (a.k.a. one of our upcoming projects!)

Need to take your vision to the next level?

Double trouble! Can you think of any scenes that use a two shot?

Check out our blog for more! Link in bio!

We're passionate about capturing an authentic creative voice in every video!

Want to bring your story to life? Contact us today to see how RPD can help!

Animation can elevate your video to the next level of quality and creativity.

Where do you think animation is the most helpful?

Lighting has a huge effect on the tone of a movie or show. Can you think of any scenes where the lighting took on a role of its own??

How to Know When to Outsource Your Video Production

Is your organization struggling with its social presence?

Have you considered using video for your digital marketing strategy?

Let's begin by stating the obvious: marketing your business, whether it's small, medium-size or large, isn't easy. As a marketer, you not only need to create highly…

Another fun day filming with our friends at Sutton Film Production in our in-house studio!

Special shoutout to Akron Coffee Roasters for keeping us caffeinated!

Happy ! Our Akron office dog, Charlie, advises you to grab your favorite tennis ball and have a fun-filled Friday!

How do you have fun at work?

Lauren has been with RPD for over two years, and we can always count on her excitement and passion for the craft to elevate every project!

Happy ! RPD appreciates all the hard work our friends at Spectrum Orthopaedics and doctors everywhere do to keep us healthy and safe!

From cannabis drying and curing to manufacturing, we love diving into new industries to tell the most authentic stories.

Want your brand's story shared? Contact us on our website to see how we can bring your video to life!

We're continuing to celebrate Women's History Month by featuring the women on our RPD team!

Check out our social media and digital marketing manager, Kaylie Yaceczko. Kaylie has been with RPD for almost a year and would love to write a novel one day!

It's ! The RPD office dogs are always ready to lend a helping paw!

(Left to right: Oliver and Teddy, Charlie, Ruby, and Moe!)

Another successful premiere in the books!

Thank you to our wonderful team, cast and crew, Cleveland Institute of Music, and everyone who attended for making the Opera on Film: Dido and Aeneas a project we will never forget!

LAST CHANCE to get your tickets to the premiere of the Opera on Film: Dido and Aeneas TONIGHT at Cleveland Institute of Music's Mixon Hall at 7:30pm!

We can't wait for you to see it!

In honor of Women's History Month, we're celebrating the awesome women on our RPD team!

Check out our screenwriter and producer, Jess Byard. Jess has been with RPD for five years and hopes to one day produce their own scripts!

DON'T FORGET to get your tickets to the premiere of the Opera on Film: Dido and Aeneas at the Cleveland Institute of Music's Mixon Hall this Friday, March 18, at 7:30pm!

Exciting news! RPD had the pleasure of working with Amber Kempthorn to bring her project Ordinary Magic: A Sunday in the Cuyahoga Valley to life:

"I’m thrilled about the premiere and continue to be very grateful for my partnership with RPD, and I can’t wait to share with everyone what we’ve been working on for the last two years."

Akron Symphony Orchestra will be premiering Ordinary Magic: A Sunday in the Cuyahoga Valley at The University of Akron's E.J. Thomas Performing Arts Hall on October 15, 2022!

Tickets will go on sale this summer, and check out the Akron Symphony Orchestra's 2022-2023 season below!

Our face thinking about sharing our upcoming projects with you:

In ONE WEEK, the Opera on Film: Dido and Aeneas premieres March 18 in-person at Cleveland Institute of Music’s Mixon Hall! We're so excited for you to see our modern interpretation of Henry Purcell's 17th century opera. Ticket information below!

Happy International Women's Day from your friends at RPD!

Whether in front of the camera or behind the scenes, we're proud of all women making their mark in the film industry.

Exciting things are brewing between RPD and the Cleveland Institute of Music!

With RPD, it's always all hands (and paws!) on deck! We're here to help tell your story every step of production, from concept to delivery!

We have an exciting project with our friends at the Cleveland Institute of Music coming soon! Stay tuned...

Which film do you think has the best scene of dialogue?

RPD is excited to officially announce our new club partnership with Akron City FC, Akron's NPSL club soccer team! We will be working with ACFC as the team's video and digital partner.

Get ready fellow soccer fans! Check out the official announcement below!

Be the first to know and let us send you an email when Red Point Digital, LLC posts news and promotions. Your email address will not be used for any other purpose, and you can unsubscribe at any time. 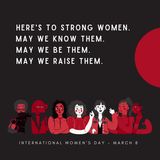 Curious Creatures at the Akron Zoo

Other Broadcasting & media production in Akron

Thank you to Innis Maggiore and Red Point Digital, LLC for working with us on our video project! Commercials coming soon!
Was going through old footage and found this little BTS clip from playing around with my CineWhoop after a shoot with Smarter Move Talent and Red Point Digital, LLC in Downtown Youngstown, Ohio.
Writer/Director Johnny Chechitelli and Actor/Associate Producer Wuyu Wantatah are taking over Loud 102.3 TODAY from 7-8pm as the CEO’s for a day!
Hosted by DjSwin, they’ll be talking about the movie and playing the best hip-hop music on the radio, including an exclusive drop from the soundtrack of the instant holiday classic “Jingle Balls.”
If you’re in the Youngstown, Ohio area, tune in TONIGHT AT 7PM!

ScarrBelly5k Red Point Digital, LLC Gravitas Ventures Brent Furrie
When we talk about RICO – Racketeer Influences and Corrupt Organizations Act (1970) – most people think of how it has largely been used in Federal cases against the mafia. (blog via Red Point Digital, LLC)
Our friends at Red Point Digital, LLC have created a docuseries entitled THE CON which is
An In-Depth Investigation Into the 2008 Financial Crisis:
Who did it, Why it Happened, and How The Con is what we are and the reason everything is $crewed up!

THE CON - Aug. 5 Live Premiere + Q&A
Main Street took all the risk. Wall Street took all the credit. TO RSVP for the live event click on the link:
https://www.thecon.tv/event?fbclid=IwAR1kmkaz8ai9w0WHQAPV-M6YApOauXZYZqsJjvQHP5Phwh8Wlio0t1SHwc4
Excited to announce our next 'Friends Of Fear Crypt' Short 'THE CAT' will be premiering on the channel tomorrow at 7pm EST.

This will also be the first ever animation film on the channel!
❤️

We are excited to hear your thoughts, click the link to set a reminder and learn more about the filmmakers ahead of time in the description bio.

https://www.youtube.com/watch?v=OFovi0H82Pk
Check out Studio One23's Beyond Expectations Barber College Public Service Announcement. Like and subscribe on their YouTube channel to show your support for your local film community. 💇‍♂️✂️

Other Broadcasting & media production in Akron (show all)