ANOMALIES # 3 has been printed!

Waiting for it to be uploaded to INDYPLANET. COM!

MY STRANGEST ADVENTURE vol. 4, the charity project spearheaded by DOC SCHAEFER will be out by the end of March!

Featuring Ultiman's nemesis Mr. Mix-it-up and Protoplasman, along many other guest stars!!

RAMM VS. ULTIMAN by ALLEN FORBES

Allways happy to see a new fan doing renditions of our characters! Spread the love!!

The Goddess of Love and War will return soon looking this good and hopefully, TO END ALL WARS.

We love one a project gets this quick, possitive reaction! (or any reaction, really!)😅

Big Bang Poser
When I did my modern update to Shutterbug a couple years ago, I didn't know much about his backstory or abilities. As a result of the recent appearances in BBA and based on the stellar work of Ron Charles Williams, I did a new version for 2022. I probably didn't need the camera in the new version, but I think it adds something fun to the piece.

The Interplanetary hero, father of COSMICA, of the WHIZ KIDS will be back soon from EARTH X, the counter-earth planet where he lives.

FACE IT, SHUTTERBUG, YOU JUST HIT THE JACKPOT!

Our resident insectoid hero crosses over with one very weird VARIANT from beyond the Multiverse.

Must be true what Alan Moore says about imaginary characters existing for real in the platonic IMMATERIA as ALLEN FORBES got to a very similar solution for MR. MARTIAN on his own!

THE LITTLE GREEN MEN FROM MARS CRAZE IS BACK!!

Joyous to bring back some characters from the BIG BANG UNIVERSE!!

Luis and I are cooking something! Pay attention to your screens, earthlings!!!

And after the TERRIFIC THUNDER GIRL VIDEO you can find below, nothing better than a color preview of her new adventure, by the great JONATHAN D'HENRY!

Thank you very much to CASE AIKEN for this "marvelous" video about THUNDER GIRL's full history and incarnations.

Check his series of SUPERMAN ANALOGUES and we are thrilled that ULTIMAN will be next!!!

Molly Wilson is the "World's Strongest Girl" at Big Bang Comics, regardless of which Earth she's on!Original Thread: https://twitter.com/CaseAiken/status/109...

It's another fun diversion from my workload. My first tribute to classic team up books. Here I'm pairing two obvious choices as my versions of Galahad and Brother Hood face the mean streets of Midway City.

CHARLIE BOATNER reviews BBA # 14: THE LAST WHIZ KIDS STORY PART I (and again, makes my day! Be like Charlie!)

I’ve been exploring Big Bang comics and your work stands out. I prefer team books and you understand their dynamics. I like how you bring your outside interests and knowledge into the stories, like Roy Thomas used to do.

Your latest story in BBA #14 has a good setup. Galahad’s building apprehension creates good tension and the Watchman’s counsel brings a moment of calm. I was surprised when the story didn’t conclude, though.

The End, Part One? What?

You were gutsy to make those many changes to the Whiz Kids and Whizzards, but I think it was worth it. Your new members grab attention. (Although I do miss She-Borg; thanks for keeping Gargoyla!) Four-armed Cosmica is fun – it’s as though Deja Thoris had been a Thark.

A writer who gets no feedback is like he's not being really READ.

That's why I am thrilled with this review by CHARLIE BOATNER of KNIGHTS OF JUSTICE (BBA # 8), and even happier of getting some of the other books by Gary and Chris to be reviewed, not an easy task nowadays...

Big Bang Adventures #8 “Knights of Justice” was good stuff! I got a Silver Age rush from the splash pages of the heroes assembled. The Alliance of Evil is a good bad gang, especially considering you created them, fresh, for this story.

The dramatic and mythic splash page of U.S. Angel versus the Chimera was worth the price of admission.

I appreciated the writer’s background essay about his use of myth. The shedding of garments/teammates at each gate to the Underworld was a clever reference and dramatic plot device. (Who would have thought that having pockets with spare change was a super power?)

I liked the rescue of Sisyphus and Tantalus (although looking them up on Wikipedia, I’m not sure they deserved rescue). And it’s unsettling that the loving Venus would replace them with mortal bad guys.

I feel especially badly for the Albine Zombie – he’s born disfigured, put into slavery, turned into a zombie, then tortured in the Underworld. What did he do to deserve all that?

My big question is, what was the key to Venus’ escape? Hades didn’t seem to have control over her (at least, not in the funny scenes of her sprucing up the Underworld). It’s true, that Blitz told her of the chaos her absence was causing on Earth, but she should have anticipated that on her own, shouldn’t she?

All-in-all, five stars (which is what I rated BBA8 on IndyPlanet)!

Thank you, Charlie. Even if free to "redesign" the Hades, Venus was magically trapped there, and not aware of the effects her absence caused in the mortal world.

Look who will be dropping by in WHIZ KIDS # 2!!

Did you know that, before BIG BANG COMICS, DOCTOR WEIRD was a member of THE LIBERTY LEGION? (not the Marvel one)

Do like him and get a stack of BBC from INDYPLANET!!

In yesterday's video interview, Chris Ecker talked about the origin of the MIGHTY HUMMINGBIRD!

And he'll be flying your way soon!

(and please scroll down to see the AWESOME INTERVIEW of our fearless leaders!!)

GET IN TOON! with BIG BANG COMICS

THE INTERVIEW OF THE CENTURY with Gary and Chris! (at least until my own, coming in two weeks!)

Get all the history of Big Bang Comics and the latest news on ANOMALIES AND the upcoming KNIGHT WATCHMAN: CREATURES OF THE NIGHT!

Join me Tuesday March 8th at 8:30pm Eastern when I GET IN TOON! with Gary Carlson and Chris Ecker co-founders of BIG BANG COMICS. Toon in to hear the story o...

Reminder! In a few hours, our editors go LIVE on YOUTUBE! GET IN TOON!!

Just read the digital edition of Big Bang Adventures #8 from Big Bang Comics and, I have to say, I can think of fewer ways I'd rather spend a Sunday afternoon that reading a beautifully drawn, beautifully written comic like this one!

It is very much a JSA-style setup, but as someone who has read very few, almost none, of the JSA books, I can safely say that YOU DON'T NEED TO! This book is the exact sort of one-and-done you would expect from a classic super-hero comic or cartoon. Written with love by Pedro Angosto and with art by the superb Pablo Alcalde, this book will take you back to your childhood when superheroes were right, supervillains were wrong, and the stories were fun and colorful and just a joy to read.

The book even contains a very helpful intro page that quickly gives you the run-down on all the characters contained within. You don't have to have ever read any of their adventures before, but I can almost guarantee you that you will want to read more when you are done with this one. I would say that they don't make them like this anymore, but clearly they do, and you can read along and enjoy with no worries about being disappointed.

This is my first foray into the Big Bang Comics universe/multiverse, but it will, by no means, be my last. In short, this book made me smile in a big way.

Tomorrow evening our Founding Fathers, Gary and Chris, will go live on YouTube!!

Be the first to know and let us send you an email when Big Bang Comics posts news and promotions. Your email address will not be used for any other purpose, and you can unsubscribe at any time. 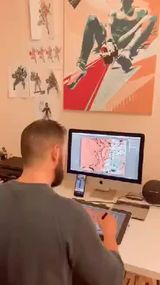 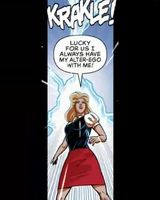 THUNDER GIRL IN KNIGHTS OF JUSTICE 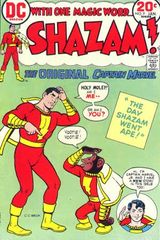 Other Publishers in Appleton

Is Mr. U.S. a character in the Big Bang Comics universe? If so, I'd like to do more with him (among others) even if it were just fan art / pin-up type stuff.
How about starting a contest where fans can send in character designs of alternative versions of their favourite heroes from other companies and the winner has his or hers' added to the Big Bang Comics universe?
Hard at work on Anomalies #5. Great art by Ron Charles Williams. Beta team, meet The Spoilers!
This came up in my memories. Dandy Don Simpson made a pilgrimage to the final resting place of Andy Warhol and took Big Bang Comics with him, as well as his custom Cowboy Gorilla doll.
Se ha iniciado la campaña de Kickstarter para la publicación de Cosmos #6 publicado por Advent Comics en un crossover con personajes de Big Bang Comics , ejemplar del cual realicé esta portada doble alternativa 💥💥 ------------------------------- Advent Comics' Cosmos #6 Kickstarter campaign has started, guest starring Big Bang Comics RTA characters! for which I illustrated this alternate wraparound cover 💥💥
If you like this guy's opinion of Batman, you might enjoy reading Knight Watchman: Graveyard Shift (available on Amazon in a collected edition), which Gary Carlson, Ben Torres and I first published at Image in 1998. We pretty much hit all the notes he mentions. Be on the lookout for our next effort, Knight Watchman: Creatures of the Knight!
Just listed!
Still working feverishly on the first issue of "Creatures of the Knight", written by me and beautifully illustrated by Ben Torres, edited by Big Bang Big Kahuna Gary Carlson. Here's a page we can show in full without giving anything away. This all transpired in the 3 issue story "Knight of the Living Dead" which introduced Red Ted and The Spook. Look for a release date early next year!
Coming...
trying to get a handle on the publishing history, Managed to acquire physical Big Bang Presents (1-6), and digital version of the IndyPlanet releases (up to 11 currently). Also acquired the graphic novels/collections (my entree to the BigBangVerse. The Image run is available as physical copies from the web site, any overlap with the runs and releases mentioned above?
Here's an "insanely beautiful" preview page from our next Big Bang Comics mini series--Knight Watchman: Creatures of the Knight with my story and script, Ben Torres art and Gary Carlson editing. A very rewarding creative collaboration.
I thought you Big Bang Comics guys were gone. Glad to find out on a browse through the internet your not. Will yo ever make a syndicated cartoon of ether of your Earth A or Earth B super team creations?