Founded in 1951, WBJC is a public, non-commercial radio station which broadcasts a 24 hours-a-day schedule of classical music and arts information programming at 91.5-FM.

The station's 50,000-watt signal reaches more than 200,000 listeners weekly across Maryland, the District of Columbia and portions of the surrounding states.

As we greet the news of Maryland's history-making Governor-elect, we look back to Wes Moore's BookNotes interview on WBJC, 91.5 FM, Maryland's Classical Music Station:
https://www.wbjc.com/2020/host-blogs/wes-moores-five-days-on-booknotes/

It’s Monday and time to get your requests for this Friday’s Listener’s Choice.

Click on the link to a conversation Kati Harrison had with guitarist Grisha Goryachev about his 8:00 PM concert tonight at UMBC under the auspices of The Baltimore Classical Guitar Society!

As we head into the midterm elections on Tuesday, it’s worth noting that the French Revolution resulted in only 10 years of democracy! Listen to JHU historian, Laura Mason, talk about the hidden part of that story on BookNotes.
https://www.wbjc.com/2022/host-blogs/a-cautionary-tale-for-democracy-on-booknotes/

Even though Judith is out this week (with Kati and Abhinn kindly subbing), this being the first weekend of November, there will still be BookNotes on Friday at 5:15pm and Saturday 10am, as JHU historian Laura Mason talks about The Last Revolutionaries and the struggle for democracy.

Good morning! I’m looking forward to playing your requests on Listener’s Choice on the 1st Friday of November 2022!

"I don’t want to give in and settle for some specialty. I don't want to spend my life as Toscanini did, studying and restudying the same fifty pieces of music. It would bore me to death.
.
I want to conduct 🎶. I want to play the piano 🎹. I want to write for Hollywood 🎥. I want to write symphonic music 🎻. I want to keep on trying to be, in the full sense of that wonderful word, a musician. I also want to teach. I want to write books and poetry ✏. And I think I can still do justice to them all. But I can’t do them all at once.
.
I have to learn to do one at a time, and to give it all my strength until I’ve done it right. Mozart, Mendelssohn, Bach, Haydn -- they were all performers and conductors as well as composers, and they did a lot of other things too. Only then, there was time."
.
💬 Leonard Bernstein, 1957
.
[📸Leonard Bernstein by Al Hirschfeld, 1958; © The Al Hirschfeld Foundation. More info: www.AlHirschfeldFoundation.org.]
.
.
.

One of music’s great multitaskers

It’s time to submit your requests for the last Listener’s Choice of October 2022! 🎃

Everything from Barbara Kingsolver’s retelling of David Copperfield to a memoir from Paul Newman on BookNotes Review this month.
https://www.wbjc.com/2022/host-blogs/booknotes-review-october-2022/

Fall being the traditional time for new releases, we are spoiled for choice on BookNotes Review this month. Please join us for some highlights at 5:15 pm Friday/10 am Saturday!

Listen below as Steven Isserlis gives wonderful insight into some of the pieces he and Connie Shih will play on the Shriver Concert series this Sunday.
https://www.wbjc.com/2022/wbjc-programs/interviews/cellist-steven-isserlis-plays-the-the-piatigorsky-memorial-concert/

I—that would be Judith—love following the the trials and triumphs of British cellist Steven Isserlis on Twitter, and it’s my pleasure to interview him about his upcoming recital. Please join us at 5:15pm today/Thursday.

Here‘s the link to the numbers/the breakdown/everything you want to know about our Fall Fund Drive, courtesy Membership’s Diana Ross. Again, THANK YOU!
https://www.wbjc.com/2022/wbjc-news/fall-drive-wrap-up-3/

Thanks for your support during WBJC’s pledge drive! I’m happy to get your requests for this Friday’s Listener’s Choice!

You helped us reach and exceed our Fall Fundraising goal—thank you for your support, and on with the music! 🎶 🎼 🎵

With Mark—happily—back on the air and Abhinn on board, WBJC is returning to its former schedule of Morning Drive with Mark 5—10 AM | Midday with Dyana 10 AM—3 PM | Afternoon Drive with Judith 3—8 PM | Evening 8—11 PM with Abhinn. We look forward to being with you on 91.5 FM.

But please don’t stop the pledges coming in for our Fall Find Drive! Although we have a special hour for you on Sunday morning, Saturday is the last day of our autumn pledge drive, so please either call 410.585.0123 or pledge online at www.WBJC.com. And thank you.

Octobass kind of sounds like a Bond villain’s name, but isn’t it cool to look at?

The octobass of the Montreal Symphony Orchestra. It typically plays one octave below the double bass. This rare bowed strong instrument was first built around 1850 in Paris by the French luthier, Jean-Baptiste Vuillaume. Because of the extreme fingerboard length and string thickness, the musician plays it using a system of levers and pedals. The levers serve to engage metal clamps that are positioned above the neck at specific positions. These clamps act as fretting devices when the performer presses the levers. In addition to the Paris instrument, octobasses exist in the collections of the Musical Instrument Museum in Phoenix, Arizona and the Kunsthistorisches Museum in Vienna. In October 2016, the Quebec company Canimex donated the octobass shown here to the Montreal Symphony Orchestra, which is now the only orchestra in the world to own one.

The mezzo-soprano, Frederica von Stade, is in town this week at the invitation of Towson University's Music Department. What a privilege to speak with her! Please join us here:
https://www.wbjc.com/2022/wbjc-programs/interviews/frederica-von-stade-at-t-u-music/

Many thanks to everyone who helped shorten the WBJC Fall membership drive! Also please give me your requests for Friday’s Listener’s Choice. 😎

Have we posted this before? 🐈‍⬛🎶

Violinist, teacher, and debut author, Brendan Slocumb, is my guest on BookNotes this month, 5:15pm Friday and 10am Saturday.

When I started my MFA in Creative Writing & Publishing Arts, the first course, Creativity, explored music, visual art, nature, sound, etc. before we got to writing. South African artist, William Kentridge, is doing something similar from another perspective! JK

We are getting closer and closer to buying back an entire day of regular programing from WBJC's Fall Membership Drive! We are less than $10k away from the $60k buyback goal! The deadline is October 10th! You can help by making a secure pledge right now at WBJC.com, and thank you!

BookNotes peeps!
“… an extremely honest writer who is not afraid to confront the hard truths.”

I’m looking forward to getting your requests for this upcoming Friday’s Listener’s choice.😎

Cleveland Orchestra receives a virtually priceless gift: A one-of-a-kind manuscript of Mahler’s Symphony No. 2 written in composer’s own hand

Ever wanted to know what Gustav Mahler's handwriting looked like? His handwritten manuscript of The Resurrection Symphony has been gifted to the Cleveland Orchestra!

The gift by German media magnate Herbert Kloiber makes the Cleveland Orchestra the only orchestra in the world to own a Mahler manuscript.

Legendary composer John Williams has been awarded a knighthood, in one of the final honorary awards approved by the late Queen Elizabeth II.

Be the first to know and let us send you an email when WBJC, 91.5 FM, Maryland's Classical Music Station posts news and promotions. Your email address will not be used for any other purpose, and you can unsubscribe at any time.

Many thanks to everyone who helped shorten the WBJC Fall membership drive! Also please give me your requests for Friday’s Listener’s Choice. 😎 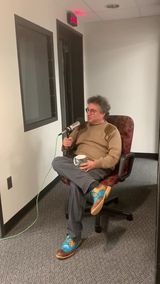 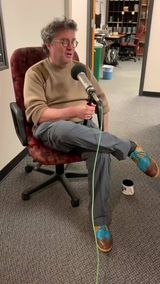 Thank you Victoria Eisner for showing your appreciation, in song, for WBJC! 📻🎼

Boots and Jonathan Palevsky decided it was a Turlough O'Carolan day. Coco approves.

Some of you may know that John sings in the choir at St. Paul's Episcopal Church—he arranged and performed the psalm for their Easter service this morning. See if you recognize all of the quotes!

Jonathan Palevsky plays a bit of Bach on this Good Friday.

Other Broadcasting & media production in Baltimore

Listen to the interview: https://loom.ly/fYP3h7w

Purchase a 50th season subscription: https://loom.ly/wlHO9jk
Many thanks to Kati Harrison at WBJC, 91.5 FM, Maryland's Classical Music Station for speaking with pianist Joel Fan Music in advance of our concert this Sunday at 3:30pm.

Kati and Joel discuss how the program was created, the way Beethoven prefigured "boogie-woogie" in Sonata No. 32, as well as the inspiration behind a work written specifically for Joel: Evan Ziporyn & Christine Southworth's "Don't Want to Wait," which is based on Van Halen's famous song, "Right Now."

We cannot wait to hear this thoughtful and virtuosic program in-person this Sunday!!
Tomorrow (Saturday) at 6:00 pm EST two hours of my recent recordings on WBJC, 91.5 FM, Maryland's Classical Music Station Thank you Jonathan Pavlovsky for the feature 🙏

Isata and her brother, Sheku Kanneh-Mason, will be performing at Shriver Hall THIS Sunday! Join us: https://www.shriverconcerts.org/concert/sheku-kanneh-mason-cello-isata-kanneh-mason-piano_1/index.php
⬇️ WBJC, 91.5 FM, Maryland's Classical Music Station's Jonathan Palevsky talks about changes in audio, from cutting tape to burning CDs to digital editing.

Hear more on the next Wavelength, out 4/27, at wypr.org/wavelength

Tickets are still available and you shouldn't wait! The Ensemble performs with Shodekeh tonight and with the TU Percussion Ensemble On March 9. Listen to the Interview: http://ow.ly/HUkK50Iew8a

Hoping that WBJC can be one of these stations! Thanks.
Listen to Judith Krummeck's interview on WBJC, 91.5 FM, Maryland's Classical Music Station with Sasha Cooke about her upcoming recital at Shriver Hall with pianist Kirill Kuzmin that coincides with the release of their new album, "how do i find you?", portraying the range of human experiences during the Covid-19 pandemic: https://www.wbjc.com/2022/wbjc-programs/interviews/how-do-i-find-you-sasha-cooke-reflects-on-the-pandemic-through-song/. Tickets to Sasha's concert: https://www.shriverconcerts.org/concert/sasha-cooke-mezzo-soprano/index.php.
CSC Associate Artistic Director, Gerrad Alex Taylor sits down with WBJC, 91.5 FM, Maryland's Classical Music Station‘s Judith Krummeck to discuss the importance of performing A RAISIN IN THE SUN in Baltimore, and what it's like to play the fiery Walter Lee Younger on stage.

Listen now: https://bit.ly/WBJC-Raisin
HAPPENING AT 12:30PM TODAY: Catch Artistic and General Director Julia Cooke on WBJC, 91.5 FM, with host Jonathan Palevsky! They'll be tackling all things BCO and THE BARBER OF SEVILLE, our first fully-staged opera with orchestra opening next weekend!
.
LISTEN LIVE: https://player.streamguys.com/wbjc/sgplayer/player.php
.
THE BARBER OF SEVILLE at Towson University’s Stephens Hall Feb. 18 and 20. Tickets and safety protocols: http://www.baltimoreconcertopera.com/barber-of-seville.
Listen to WBJC, 91.5 FM, Maryland's Classical Music Station's interview with pianist Conrad Tao from the Junction Trio, in which he speaks about the trio’s upcoming performance at Shriver Hall this Sunday! https://bit.ly/3GIEJDw.

Join us in-person or virtually for the concert this weekend: https://www.shriverconcerts.org/junction.
Would it be possible to have some Grigorgy Kurtag- or would that be asking too much- play list still way too conserv ativ e- from supporter poet activist dav id eberhardt
x

Other Broadcasting & media production in Baltimore (show all)