Macro product shots in the studio.

Time to add some color to 2022. New heavy blend hoodies.

Thx for the logo animation!

A little TLC in the studio. Turnstile’s banging new video partially shot here. Be sure to watch it in its entirety on yt.

Boat to boat with and

Conquering the elements of the Chesapeake Bay with Megalodon Adventures.

Living the dream in the studio. 📸 credit Curtis Wilson.

🎥 🎬Roll cameras! Another smooth shoot in the studio today thanks to everyone’s awesome work! 🙌

🛑 Prepping the studio for a client shoot. 🚗 💨

Non-union talent are welcome to submit headshots to: [Email hidden].

Baltimore based production company, Harbor Craft Films (harborcraft.net) is now casting a commercial spot featuring exciting tourism activities on the Chesapeake Bay. Shoot is planned for the first week of May, 2021 at various locations around the Bay in Maryland.

We’re especially interested in actors who are already in their own COVID-safe pod or living together. Shoot is entirely outside, mostly on boats, on the open waters of the Chesapeake Bay so this is not ideal for those prone to sea sickness. Standard COVID safety protocols adhered to during the production. Talent will be paid, including travel reimbursement.


Baltimore based production company, Harbor Craft Films & Studio (harborcraft.net) is now casting a commercial spot featuring exciting tourism activities on the Chesapeake Bay. Shoot is planned for the first week of May, 2021 at various locations around the Bay in Maryland. Non-union talent of all ages and ethnicities are welcome to submit their headshots to: [email protected].

We’re especially interested in friends, couples or families with children who are already in their own COVID-safe pod or living together. Shoot is entirely outside, mostly on boats, on the open waters of the Chesapeake Bay so this is not ideal for those prone to sea sickness.

Standard COVID safety protocols adhered to during the production. Talent will be paid, including travel reimbursement. Freshly painted GREY cyc available. Client had to reschedule. If you could use this for your project, get in touch and come take advantage of it!

Before the real snow, there was the movie snow. All black cyc for a recent client rental. With and .

Eddie Lucas from Bravo’s ‘Below Deck’ recently in the studio for interviews appearing in the just announced Season 8!

Excited to be starting a new project today with foundation.

A Harbor Craft Films co-production is finally coming to digital release this fall. Trailer in comments. I’ll keep ya’ll posted on where it lands. 🙌 🐕 🏁 🐈

Outside the studio rn. 🌅

Interview (supplying feed to execs in NY & LA) today in the studio, with a cast member from a show you probably know, on a network you most certainly know. 🤫 Top secret...this season’s cast not yet publicized. 🎥 🎬 📺

Crew is prepping gear for a 3 week feature down in Florida. Godspeed.

Shoot this week in the studio. @ Harbor Craft Films

Episode 2. Beth Haydon. Beth has some uncommon wisdom to share with you all - and host Bryan Preston. Come on along!

Proud to share this spot we produced for Plus One Rentals. Check it out!

When you need that equipment for your set or event, who you gonna call?

Harbor Craft Films is proud to announce a new Baltimore comedy series shot here in the studio. This is Post-Traumatic Laff-A-Matic. Subscribe to the YouTube page for episodes coming soon!

Baltimore is a city with a flavor and charm all its own. Coming soon, a new series that brings you Baltimore's unique, vibrant, uproarious, and not quite saf...

Producing a live event today. If you’re interested in upping your live event game with low-latency high-bandwidth streams of your events or webinars to reach your audience, get in touch!

Tomorrow, Maryland is opening the flood gates for their PUA (Pandemic Unemployment Assistance) benefits program. One of the requirements is "Proof of an offer to begin employment that was postponed or withdrawn due to COVID-19." If you've worked with our production company in the past, hit me up and I'll see what I can do about helping you with this. Visit MDunemployment.com for more info.

That feeling when everything fits just perfect in the travel case.

Studio is 🔥 today with flame and spark cannons! And a bit of 🌊 🏄‍♀️! Providing studio and crew support for a commercial spot. 🎥 🎬

Be the first to know and let us send you an email when Harbor Craft Films posts news and promotions. Your email address will not be used for any other purpose, and you can unsubscribe at any time. 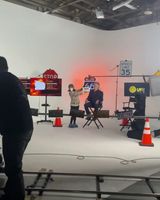 Some badass shots featuring the John Vallon motion control robot that lives here at the studio, fire performance by @lydia.lux shot by Spencer Grundler, and of course harbor craft’s own Nick Gardner.

Proud to finally share the videos we produced this year for USAID about their West Africa ebola recovery efforts. Here are highlights from the 3 weeks we traveled through Liberia, Sierra Leone and Guinea, capturing images to tell the story of USAID’s efforts in the region to prevent and combat infectious disease outbreaks. Thank you Alex Jennings, Neneh Diallo, Jake Lampell, and everyone else who supported us in-country and back here at home. Check out the full videos @ http://www.harborcraft.net.

I, for one, welcome our new robot overlords. 🤖 Motion control in the studio collab with John Vallon Photography.

A recent commercial spot for Apple Federal Credit Union shot on our cyc. DM or e-mail us at: [email protected] for your next studio space rental!

For this Volkswagen tire commercial spot shot in the studio, we helped HZDG build a room made of tires!

Farewell, Freetown. You will be missed. Your people are beautiful, generous and courageous. We will be back. In the meantime, on to Guinea 🇬🇳!

Another day of adventures in the mountains of Sierra Leone. Jeremy strapped himself into the back of the land cruiser and shot motorcycle riders with the Osmo pocket, got some great drone footage and almost had his camera snatched right out of his hands!

A bit of a bumpy ride on our chartered boat from the airport to the mainland here in Freetown, Sierra Leone. Thankfully no gear lost overboard!

Getting a taste of the local street life in Caldwell, Liberia.

Holy smokes, Batman! Over 100,000 bats circling us like we’re inside a snow globe. The 2014 Ebola outbreak here in West Africa may have all started when the virus was transferred from bat to human. We were able to get access to the grounds inside the US Embassy to shoot this incredible footage where a massive bat colony lives among the trees. Also conveniently provides embassy security as it’s creepy af!

Found a great view at the highest vantage point in Monrovia, Liberia. Perfect to shoot the sunrise later this week using our #djimavicpro2!

The Boring Company's (not a)flamethrower in the studio today. Let’s light it up!!

Beer Unites! A Tribute to Baltimore

Getting artsy with the robots. Shooting some macro / micro impressionistic paint and canvas elements. Thanks to @johnbernardvallon, @nelenish and @cambot3000. Linda Shannon Miller #haborcraftfilms #baltimorefilm

Other Film & Television Studios in Baltimore

Other Film & Television Studios in Baltimore (show all)