Penetralia Mentis JGB is a New York City based Artist GB was born in Brooklyn NYC and spends his days working in the NYC Construction Industry.

We SOLD OUT all our Direct-To-Vinyl. THANK YOU!!!

James G Barry Band is teaming up with @leestavall studios in Brooklyn to record a handful of #exclusive one-of-a-kind #vinyl #records as part of their #DirectToVinyl #Live #Sessions project!

How it works: Select a song from the list on the link below, we will then perform that song LIVE, @leestavall cuts the record in REAL TIME making you the ONLY owner of that performance. Kinda like your own #audio #Polaroid. They literally have an olde school lathe that will be cutting the record right there in the studio. LIVE - No over-dubs.

Here is the link:
https://leestavall.com/products/jamesgbarryband
You can include notes for me to add a dedication at at the start of the song - it’s up to you. The record will be shipped to you a few days after the session. Quantities are very limited! #penetraliamentis #penetraliamentispublishing #jamesgbarryband

James G Barry Band is teaming up with @leestavall studios in Brooklyn to record a handful of #exclusive one-of-a-kind #vinyl #records as part of their #DirectToVinyl #Live #Sessions project!

How it works: Select a song from the list on the link below, we will then perform that song LIVE, @leestavall cuts the record in REAL TIME making you the ONLY owner of that performance. Kinda like your own #audio #Polaroid. They literally have an olde school lathe that will be cutting the record right there in the studio. LIVE - No over-dubs.

Here is the link:
https://leestavall.com/products/jamesgbarryband
You can include notes for me to add a dedication at at the start of the song - it’s up to you. The record will be shipped to you a few days after the session. Quantities are very limited! #penetraliamentis #penetraliamentispublishing #jamesgbarryband

This Friday Freddy's Bar and Backroom is an amazing evening of Music and Holiday Fun! Green Lady returns to Freddy's singing original tales that will transport you through harmony and beauty. The evening will be headlined by the Brothers Diego Tommy Lombardozzi & Joseph Milazzo bringing in the immortal songs of Johnny Cash to close out 2021! Hope to see you there! #jamesgbarry #jamesgbarryband #scrantonia #electriccitypolka

Kathy Geary, host of 'Now and Then' on WJFF Radio Catskill, recorded performances and interviews.

The Third Annual Porchfest in Callicoon, NY September 25 & 26, 2021 Sat and Sunday. Two days of music performed outdoors at some of the loveliest historic venues on both the Upper and Lower Main Streets in Callicoon, NY including: The newly renovated Callicoon Train Depot, The Western Hotel, Rafter's Tavern, Callicoon Brewery, the Dan Brinkerhoff Gallery and The Weigh Station.

Porchfest performances and interviews will be broadcast in two episodes on SUNDAY STAGE at 7pm October 3, 2021, and October 10, 2021

Callicoon PorchFest James G Barry Band at 44 Upper Main Street - Dan Brinkerhoff new Gallery. What an amazing venue Poison Love hosted all day. We had a great time playing there and were privledged to have Neel sit in with us for a couple of songs on Tabla! (Neel walks up at 0:48 Seconds) Thanks Again you rock!

Callicoon PorchFest 2021 James G Barry Band LIVE at the Western Hotel. Thank you Maxwell Karmak for helping us out with the SOUNDZ

Callicoon PorchFest 2021 Thank you Dan Brinkerhoff and Poison Love for hosting a stage at porchfest. The NEW gallery is amazing. Here is James G Barry Band "Scrantonia" with Lyrics :)

James G Barry Band performed a benefit show at the Minooka American Legion in Scranton PA. In the middle of the first set a bag pipe band stopped by (Post the Scranton St Pats Parade.) We definitely don't "Play Requests" normally but how could we say no to this guy! JGB Band LIVE 9/18/21 Scranton PA

Amazing weekend with some great friends Sylvia Herrera, Joseph Milazzo, John LaMacchia unveiled their new project Green Lady #greenlady and blew everyone away with complex harmonies and songs that sounded like they were handed to them from distant place. The James Barry Band have been busking their way back to Callicoon for months and brought alot of new songs. Please check out James G Barry on Spotify :) XOXO

We had an absolute blast with the host-with-the-most Guy Brewster Smith at the inimitable Rafter's Tavern. Here's a video of the first set including a ripping version of our new tune Scrantonia! XOXO

Thank you to MADONNA+CHILD for the amazing artwork!

This is a song that I wrote doing some socially distanced busking this fall. (It is being released on all platforms this week.) I was trying to put into words the feeling of being outside after being inside for so long. If you look at it in terms of air pressure it is typically ALL 'One Atmosphere.' So what are the things that make it feel so different? This song tries to chase what else it could be. Like most things in life they are lie in the realm of the ephemera. Special thanks to Henri Robert Dupont for the Art Work that will be featured on the release. Thanks to the players Christopher Troy Sanchez on Cajon, Tom Kotik on Bass, and David B Wilson on Bari Sax! Mastering by ArsDivina Steve Turnidge.

14.7 lbf/sq in (One Atmosphere) Artwork by Henri Robert Dupont

Garota de Ipanema won the Grammy Award for Record of the Year in 1965, and this month is the birthday of Heloisa Pinheiro, the inspiration for this song. In the summer of 1962, Carlos Jobim and Vinicius de Moraes were inspired to write this song when they saw Heloisa walking back from the beach in Rio de Janeiro.
The title of this video is ‘Garota de Ipanema Sobrevive a Pandemia’. Loosely translated: ‘The Girl from Ipanema Survives the Pandemic'. It was a tongue-in-cheek (Google Translate-assisted) name because we recorded this while quarantined from our homes and I think I hoped that by the time we were done with the video things would have settled down. Unfortunately, much of the world, especially Brazil, is still fighting the COVID-19 pandemic, probably no where worse than in the Favelas outside of Rio. I was thinking of changing the name of the video because I didn’t want it to sound sardonic, but in truth I know Brazil will get through this. I have had the chance to travel to Rio; the language, music, and culture is so beautiful. That was the original inspiration behind doing this. Anyway, this is our video!
Thank you to Elisa Winter for singing on this track, Neil & Cynthia Madsen on Trombone and Tenor Saxophone, Tim Mulay on Bass, and David B. Wilson on Flute. #garotadeipanema #asocialdistancedproduction #RioEuTeAmo #girlfromipanema #JamesGBarry #JGB #penetraliamentisproductions #ipanema

This is a Teaser Video with a clip that DistroKid.com made for me. I could not resist. I apologize in advance. Please do check out "Burned Brightly in Reply" by James G Barry from the album ENTRAINMENT though. Love Baby Yoda

All Our Friends - A Tribute to the McSorley's Bash, Teaser Trailer

All Our Friends - A Tribute to the McSorley's Bash - Teaser Trailer is here! Production is under way for the documentary short film due out in spring 2020.
See you Friday for the 20th Annual McSorely's Bash - maybe you'll make it into the movie :) Salute' Slainte! JGB

With the McSorley's Bash almost upon us. I was thinking about a few folks that aren't around anymore. Not in a negative way; just thankful and happy I have gotten to know so many incredible people. Fabula a Acerbum Dulce means 'a bitter sweet tale' such as it is.

Be the first to know and let us send you an email when James G Barry posts news and promotions. Your email address will not be used for any other purpose, and you can unsubscribe at any time. 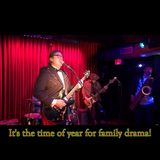 JGB was born in Brooklyn NYC and spends his days working in the NYC Construction Industry. Jim started teaching himself Guitar an his mom's old acoustic age 12. He then started trying to learn from whatever styles he could. Throughout high school and college Jim played in various bands in a variety of styles including liturgical/folk groups, Jazz Ensemble, and the Scranton, PA group Metanoia. Today Jim is a founding member of Crierbrothers, a NYC indyrock group. Their EP "Original Music and Guide to Creativity" was re-released in 2013 with a collection of short stories and artwork entitled OM>E available through Mcnally Jackson Books. excerpt from CRIERBROTHERS.com "Churning out a bracing breed of music that drinks deeply from the well of their Seattle-meets-Brooklyn roots, Crier Brothers play real rock ‘n roll that some of us desperately need today. Born out of the live Empire Vista collective sessions, a roaring force fueled by low-end melodies was created in New York City to tell their story from the gut. Harkening back to the time before the alternative tag was bastardized, they barrel through the bu****it led by a three-guitar cordon and clockwork rhythm backing. Filmmakers, writers and general raconteurs Jason S. Dennie and James G. Barry, the original brothers, are here as a reminder that authenticity isn’t dead. Crier Brothers have recently released an EP, “Original Music & Guide to Existence” and coinciding book filled with intriguing irreverence that bleeds from the same vein as their music. " JGBs first CD is titled "Wake Up Singing." The CD has eleven tracks and includes "Why we Make Girls Cry", "The Sea" and "Collection of Dust." Produced by Tim Champion of The Hippy Nuts the album explores the feelings that lead to the albums title. "I was watching Krishna Das perform in NYC in a Yoga Studio in the East Village. The room was packed and it was very warm. He was pumping on the harmonium and we were all chanting. I was sitting cross legged and leaning with my back against a column. At some point I started to drift off into a trance, or fell asleep; I'm not sure the best way to describe it. When I woke up I realized that my mouth was open and I was still chanting. It was very surreal and inspiriring, I'll never forget it." One of the most interesting tracks on the album is "South Mountain Road" which is based on an actual road in Rockland County. Champion took samples from an old demo Jim had made for the song and looped them. They then layered on the vibe. Kathena Bryant sat in on vocals and the brutal guitar lead was slung in by memphis guitarist Robert A Johnson. Robert Johnson is best known for his hit album "Close Personal Friend." "Songs About Falling" title came about a different way. JGB was going over his artwork direction and songs for the project with Andrew Anderson. Andrew, originally from Scotland, is an Architect in NYC and first collaborated with Jim by starring in the infamous ending scene to JGB's short film "Sunny Day." Jim was complaining that he couldn't think of a title that wrestled with all the emotions of love and loss that gave birth to the project. Andrew offered a title he had originally intended to use on his own project. The script writing on the CD is actually Andrew's handwriting. The album was Produced, Engineered and Mixed by Grammy Nominated Peter Bischoff. Jim is also a member of the NYC Based IndyImprov Group Empire Vista. Empire Vista regularly performs with other troupes stemming from the godfather of the movement, Seattle's own, John Leighton Beezer all over the country. In the Fall of 2013 Empire Vista performed with the Ferro Alloy Orchestra to a crowd of hundreds on the streets below the Manhattan Bridge on the Brooklyn Shoreline. The performance was to support the work of the Manhattan Iron Project led by Michael Dominick. Mike did a live burn and painted with molten iron. The night ended with Mike pouring molten iron onto Beezer's pink Squier Stratocaster.