Do you have a music show coming up, or are you a venue that wants to post your upcoming events? Let Be the first to know and let us send you an email when The Texas Promo Gal posts news and promotions. Your email address will not be used for any other purpose, and you can unsubscribe at any time.

Send a message to The Texas Promo Gal: 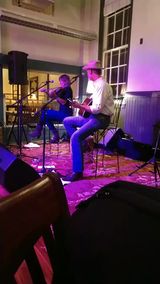 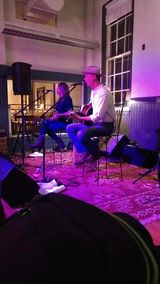 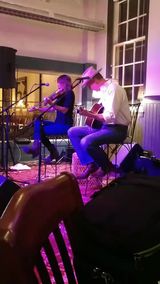 Max and Heather Stalling live in person in Caldwell, Texas!

Each year at the Bluebonnet Youth Ranch fundraiser, the super-talented Bobby Flores performs Orange Blossom Special with a collection of artists on stage at Schroeder Hall. This year's group included Bonnie Riley, Ron Knuth, Johnny Bush, Matthew Menke, RJ Smith, and Jack, one of Bobby's students. Take a listen to a prime example of the art of fiddling around. :)

On Oct 10, Dan Johnson performed during an acoustic pickin' party in Victoria, Texas. The party was one of several that followed fundraising events for the Bluebonnet Youth Ranch. The members of the circle included some amazing and award-winning talents, including Frank Martin Gilligan and Terry Casburn from Mason Dixon, Johnny Bush, Allen Shamblin, Clifton Jansky, Matthew Menke, and Danny Everitt. Dan lit up the room with both his personal material and his covers. This one is his version of Danny's Song, dedicated to his mom. The others harmonized in with him and added some additional sound to produce this awesome sound. This will be one of several I will be posting and sharing on his behalf. Enjoy!

Texas country artist The Scott Taylor Band got to be punk rock superstars for one night - Halloween 2015. This was their finale' number, 'Chug', with special guest Bonnie Riley on the fiddle. The hair makes it for sure ;)

Other Social Media Agencies in Bryan

JUST 1 SHOW this week at Just Wingin It in Baton Rouge this Saturday 8/6/22 . 7:00 pm . Cold Beer, Wings & Great Crowd. 📸: The Texas Promo Gal
Check it out, folks! Thomas Michael Riley Music’s official video for “Boys From Luckenbach” is out and features some familiar faces! Take a listen and watch, y’all!! The Texas Promo Gal Luckenbach Texas James Lann James Lann Music
Running the back roads of the Texas Hill Country gets me thinking...what songs are a 'must play' about our amazing state?

Tell me some more!
We like the same music! Great job!!
x

Other Social Media Agencies in Bryan (show all)