Arcadius Productions is a provider of non-scripted reality television founded on the principal that huge personalities make great content.

Jenny and Gary are live on Entrepreneur. Check it out!

Doing a little leather work in Ogden Utah for Start Up S7!

When you’re sponsored by Land Rover, of course you go to the Bonneville Salt Flats!

Great to be back in the saddle for another exciting season of Start Up!! #arcadiusproductions

Start Up S7 is in full swing! #teamArcadius

Gearing up for more Gritty to Pretty! Production starting soon.. so stay tuned!

Arcadius is always looking for talent! If you know someone who is an expert in their field and has a HUGE personality, send us a message! 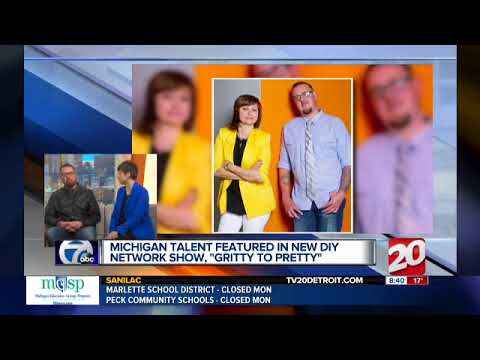 Our co-founders talk "Gritty to Pretty" on DIY and more !

Two Michigan natives are being featured on the new DIY Network show, "Gritty to Pretty," where Jeremy Cole takes a neglected ranch in Kalamazoo and renovates...

If you missed our segment on WXYZ-TV Channel 7 today you can catch it here ! Don't be shy apply to be the next Reality Star !

Think your life should be plastered on national television? A production company in Detroit is looking for you!

Gritty to Pretty: Kzoo man makes it to DIY network

We are very excited to air our Pilot this Saturday on DIY Network ! Check out #grittytopretty and Jeremy Cole magic on TV!

Check out the sneak peek of Gritty to Pretty on the Arcadius page, and tune into DIY on February 10th.

Arcadius Productions added a button to help you learn more about them.

Arcadius Productions added a button to help you learn more about them.

Be the first to know and let us send you an email when Arcadius Productions posts news and promotions. Your email address will not be used for any other purpose, and you can unsubscribe at any time.

Send a message to Arcadius Productions:

Arcadius Productions is a provider of non-scripted reality television founded on the principal that huge personalities make great content.

Formed in 2012 by the merger of two documentary film and commercial production companies, Arcadius is focused on producing compelling non-scripted reality television.

Arcadius is responsible for over 1500 hours of national television programming. As the Executive Producers of the PBS series "Start UP," going into its 5th season in fall 2017, they show extraordinary people that have followed their dream of creating a small business. As one of the top 4 business shows on TV, they have helped paved the way for other popular business focused programs.

Arcadius is dedicated to telling real stories and giving viewers the unique opportunity to see life through the experiences of our characters.

Other Media in Detroit

It’s official! Tune in to DIY tomorrow at 8pm!