MTV started 40 years ago today!? Wow - time flies... Who first got to know Def Leppard through MTV? How about your favorite DL video?

Just wanted to let everyone know that I am not on RebelHD2 anymore due to a management change.
However I would like to keep this page going. Thank you for all your support in viewing it!!! 

Carrie is going to VEGAS! 🎉

Led Zeppelin guitarist Jimmy Page recalled the “wonderful” moment that came after a difficult start to the solo for Stairway to Heaven in June 2021.

David Lee Roth released his new song, Giddy-Up, in May 2021.

"We've got a bunch of great new ideas for tracks, lots of really strong demos."

Prince estate reportedly undervalued worth to IRS by estimated $80 million

A new court filing by the Internal Revenue Service claims the estate of legendary singer Prince undervalued its worth by at least 50 percent.

Found this on YouTube and just had to share with my audience! Curt Smith from Tears for Fears being interviewed!!

Tears for Fears singer Curt Smith and his daughter Diva joined us live via Skype to talk about their acoustic performance of “Mad World” they shared on socia...

Thank you all for listening to us throughout 2020! The Rebel-HD2 is excited to see you again in 2021, so keep your radios on and your ears open 🎉👂https://bit.ly/3kjVAT4

LAS VEGAS (FOX5) -- The Mountain West Conference on Wednesday announced that due to positive COVID-19 cases within the UNLV men's basketball program, the two-game series between the Runnin' Rebels

Sorry about today my fellow listeners! Had to take care of a few personal things so I cancelled the radio show, last minute! I should be back on the RebelHD2 next Sunday!!

Love Def Leppard!! Rick Allen has such a wonderful talent!!

This week marks 27 years since Mr. Jones was released. What a ride it has been since then...

Loved his music in the movie ROADHOUSE!

If you didn't see Suzanne's livestream event on October 8th from New York City’s iconic Blue Note Jazz Club, or would like to watch it again, you can stream a special encore replay of the full performance on December 20 at 8:00 PM EST!

Please note, if you're unable to watch the replay on 12/20, the stream will be available on-demand for 72 hours after the show airs so you can watch it at your convenience!

Bruce Hornsby: Anything Can Happen

Bruce Hornsby: Anything Can Happen

More than 30 years after scoring his first crossover hit with The Range and 25 years since his final show with Jerry Garcia, Bruce Hornsby finds a whole

Thanks to all the new “likers” out there on my page! Join me on the RebelHD2, Sunday at noon for an awesome show! You never know what you’ll hear when you listen!

Stevie Ray's manager at the time asked for more money than they were worth. My agent said, "This is ridiculous. We can't pay them this kind of money. They're not worth anything. We're just helping them by putting them on the tour. They should be paying us. Blah, blah, blah."

I said, "Forget about it. Just pay him. Trust me. You'll be glad you did."

The first show was in Oklahoma City. I showed up early and went straight to the wings of the stage. Stevie Ray Vaughan and Double Trouble with Tommy Shannon and Chris Layton. They were just killing it. Then the song ended and there was a moment of dead silence. Then the audience started chanting, “Huey, Huey, Huey, Huey."

I thought, "Oh my gosh. That's horrible. These people don't get this." I couldn't believe it.

Double Trouble finished their set. They were put off by the reaction and went into their bus.

I went onto their bus and told them, "Look, fellas, you're tremendous. Here's the thing, the audience is invested in us. They know our music. They play the record on the way to the venue. No matter how good you are, they're bound to think that we're going to be much, much better. There's no way you're going to score here.

"What's going to happen is, when they go home tonight, they're going to say, 'Hey, you know what? That first band was pretty good.'"

I said, "Just relax. Have a great time. Believe me, this will be good for you guys."

They did and we had a wonderful tour. Stevie Ray got on stage and played “Bad Is Bad” with us every single night. We just were inseparable for the whole tour.

Members Only Radio Show is going to take a vacation day for the holiday weekend!! I’ll return next Sunday with 80’s, 90’s and some holiday cheer mixed in!! See you next week!!

See you on Sunday for some good music here! Sunday at noon on the RebelHD2

Governor Steve Sisolak will hold a press conference Sunday afternoon at 4:30 p. m. The governor will provide an update on Nevada's ongoing battle with COVID-19. The press event will be available to watch on News3lv. com.

Slash on AC/DC's new album: "It's a great f**king record"

Count Slash as one of the many fans of AC/DC's new album, Power Up, as the Guns N' Roses guitarist calls it a "great f**king record."

How to watch the Stand Up for Heroes virtual benefit for veterans with Bruce Springsteen, Jon Stewart and more

How to watch the Stand Up for Heroes virtual benefit for veterans with Bruce Springsteen, Jon Stewart and more

Prince Harry, Tiffany Haddish, Sheryl Crow, and many other comedians and musicians will join host Jon Stewart for the first virtual edition of the yearly benefit.

EXCLUSIVE: Two time Grammy winner and Oscar nominee Kenny Loggins is receiving the Career Achievement honor at the next Hollywood Music in Media Awards (HMMA) which will be held on Jan. 27, 2021 i…

Video from the show Psych that I made reference to during last Sunday’s Members Only Radio Show. Curt Smith from Tears for Fears makes cameo appearance on the show!!

Curt Smith hits the TV airwaves with his cameo role in "Psych". Aired 9/1/10. Check my other video for the rest of Curt's appearance on the show.

Be the first to know and let us send you an email when Members Only Radio Show posts news and promotions. Your email address will not be used for any other purpose, and you can unsubscribe at any time.

Send a message to Members Only Radio Show:

Tune in WQNA and wqnaradio.org this Thursday for Mister Eric! It’s the end of October so we are pulling out everything for the show on Thursday!! Be sure to tune in from 10-3pm!! 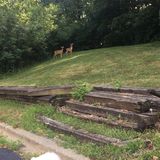 Spotted this flock of deer while out walking Lanae 🐶 today over by where Leann and I have been hanging out!

Thanks!
Love Come Down by Evelyn Champagne King? Love the show!
x

Other Radio Stations in Las Vegas (show all)