P123 Productions is the production company with Nate Hapke at the helm. Circa 2010. Established in November 2010, P 1 2 3 Productions is dedicated to producing entertaining films about the lives and experiences of human beings.

Our goal is to tell stories that our audience can relate to on some level; emotional, psychological, spiritual, or, ideally, just human. Filmography:

Our goal is to tell stories that our audience can relate to on some level; emotional, psychological, spiritual, or, ideally, just human. Filmography:

To the Moon and Back

Our Writer/Director has an exciting new short film project and he needs your help! Will you pledge some support and share the link so that he can make another award-winning short film?

A grieving man finds solace in the presence of his wife and daughter in the moments before he has to eulogize his mother.

The 7th set of Laurels for One More is as a semi-finalist of the 2018 Hollywood Screenings Film Festival!

We’re very honored and excited to announce the 6th official selection and third screening in Los Angeles for One More. Screening and ticket information coming soon for the 2018 North Hollywood Cinefest!

The trailer for One More.

Our Writer/Director took home the Inspiring Filmmaker Award at the 11th Annual Trinity International Film Festival. What an absolute honor!

You can finally watch our film that has been around the world on the festival circuit and back again.

Bryan and Chloe are each other's person; more than just a simple boyfriend and girlfriend. The philosophical debate over predestination versus free will is one of Bryan's favorites, though sometimes it makes it hard for him to stay in the moment. Chloe is wise beyond her years and does her best to e...

Lots of amazing projects lined up for the coming months/years. Three more shorts, a webseries and the first of many features.

Notification came in that our Writer/Director's Emmy win was added to IMDb! Check it out.

There's been an awesome flood of support over the past week! Shout out to Dominick Nuzzi, Lisa Donahey, Regina Johnson, Ariana Katarina, Karissa Valencia, and Judith Berg for joining us on this adventure and bringing us closer to our goal. We are so thankful for the support of our endeavor to spread a message of the improtance of self-love!

Time is running out! We're making a movie and we need your help! Have you supported us yet? Two quick and easy ways to help us spread the message of self love. Check the link to find out more info! https://www.kickstarter.com/projects/1634820429/slate

The latest press interview for Writer/Director Nate Hapke and his childhood paper.

The Slate team is now in crunch time! Less than four weeks to raise the remaining amount of $3,279. While large pledges are amazing, so are 25, 10, 5 and even $1. Did we mention our Writer/Director won an Emmy last night as a member of the General Hospital Directing Team?

After being selected as a semi-finalist last week, Brunch is now a Finalist in the 2017 Nassau Film Festival. The run continues.

55%! Shout out to Beth Shepherd Peters and Christine Ucar for helping team Slate. reach 55% of our goal! We're running out of time; will you help us reach 100%?

WILL YOU HELP US?
Friends,
We've had a very strong showing thus far; almost 50% of our goal in less than two weeks. For those that don't know, if we don't raise 100% of our goal, then we won't get any of the money raised thus far. This of course, would make it very difficult for us to make this the very best movie that it can be. Donating money is awesome, but sharing the campaign page and/or this video helps get our message and goal out to many more people and that is priceless.
We look forward to the opportunity to make this movie and share it with you.
All our best,
-The Cast & Crew of Slate.

Our lead actress Niya Wright​ and Writer/Director Nate Hapke​ tell you about the film!
Want to learn more ways you can help, go here: https://www.kickstarter.com/projects/1634820429/slate?ref=user_menu

Our Writer/Director Nate Hapke was interviewed this morning by The Wilton Bulletin. We'll post the link when the story is published!

Did you know that you can NAME A CHARACTER in the movie? Yay creativity! Click the link to find out more!
Shout out to Russell Oliver for his recent pledge of support!
https://www.kickstarter.com/projects/1634820429/slate?ref=user_menu

20 people have helped us surpass 35% of our goal in the first week! Will you be next? Shout out to Rosie Angelo, Crystal Craft, Avi Fuchs, Nadine Wright-Arbubakrr, and Sandra Filmer for their recent pledges of support. It takes a village, and we live in an amazing village.
Visit the link here to learn more: https://www.kickstarter.com/projects/1634820429/slate?ref=creator_nav

Our lead actress Niya Wright​ and Writer/Director Nate Hapke​ tell you about the film!
Want to learn more ways you can help, go here: https://www.kickstarter.com/projects/1634820429/slate?ref=user_menu 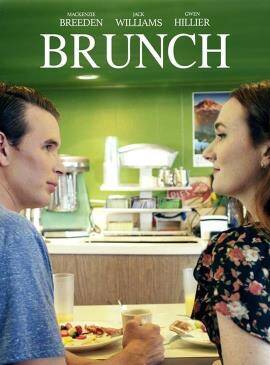 Amazingly fulfilling to see another one of our films in the Short Film Corner. This page confirms that hard works pays off. http://sub.festival-cannes.fr/SfcCatalogue/MovieDetail/76e5bdf9-302d-4279-b57a-9afda31006af

Brunch was selected as 1/30 films to appear in the 2017 Creative Minds Festival de Cannes Programming Block and thus will be available for screenings in the Short Film Corner of Cannes 2017. #P123 #SoZa

With two new EPs attached to the project today, Gary Tomlin and Sandra Breeden, we've now passed 30% of our goal is less than 5 days! Will you be the next to join our adventure? Even just sharing the link will mean the world to my team. https://www.kickstarter.com/projects/1634820429/slate?ref=user_menu

Over 20% in less than 4 days?!?!!? So thankful to Sandra Breeden and Scott Sickles for supporting P 1 2 3 Productions and Team Slate. on our next adventure! Will you be the next to join and support?

WOW! 10% of our goal has been surpassed in less than 48 hours! Will you be the next person to support our filmmaking adventure? Special thanks to Lucie Gillespie, Beth Hapke, Lynn Oliver, Roman Geronimo, and Carolyn Brook for their recent support!

My team and I are excited to share with you the crowdfunding page for our next project Slate.​ Please check it out, join the adventure and SHARE the link with your friends and family. Help us make another award-winning film.

A very special congratulations to Gwen Hillier for winning Best Supporting Actress for her role in our latest completed film, Brunch. Can't wait to work with her again on Slate.

Upcoming screening info: Brunch will be screening at the Milledgeville Film Festival (Our 9th festival) on April 27th at 3pm. If you or a friend are in the Atlanta area and would like to support the screening, we'd love to have you there and I can give you more information. P 1 2 3 Productions casting announcement: our three leads are in! This will be our second collaboration with all three, and we couldn't be more honored and excited.
Brunch is up to 7 festival laurels, One More is wrapping up in post, and For Ben (https://vimeo.com/204311182) is available for screening. As we gear up for production on Slate., if anyone is interested in supporting the film's production monetarily in exchange for an executive or associate producer credit, or even a special thanks credit in the end credits of the film as well as on IMDb, please let us know! Any help would be greatly appreciated!

P 1 2 3 couldn't agree more with Mark Duplass, one of our favorite Actor/Writer/Directors, on Moonlight, our favorite movie of the year:
“I really want you to see ‘Moonlight.’
“Because it is a bit of a miracle.
“The sad truth is, films like this don’t get made anymore. It is a film about a young black boy from Florida navigating his burgeoning homosexuality while simultaneously trying to overcome the perils of being raised by his drug-addicted single mother. It has no movie stars. It is unabashedly honest and unapologetically runs against the tide of what is commonly considered to be commercial cinema. That’s all to say… it is impossible to get a movie like this made in today’s indie film ecosystem.
“Yet, the film exists. Somehow, it got made.
“Thank God.
“Because this is my favorite film of the last 10 years.
“And, I think it’s fair to say that it’s an important film. Not important in the ‘eat your vegetables and see this important art film even though it’s painful to watch’ way. The film is important because it is actually not a niche film. It is not just for people who like movies that feature marginalized characters who aren’t often featured in leading roles. The film is important because it is a beautiful, sweet, open love letter to the core human values that connect us all. It is important because it reaches beyond its specific characters and tells the story of all of our dreams and collective life experiences. It simultaneously tells a harsh truth and, miraculously, does it with an air of hope. It is the kind of film I have been trying to figure out how to make for my entire career.
“So now I recommend it to people as loudly and as often as I can. And I make it a point to recommend it not just to art film geeks but also to fans of blockbuster cinema, childhood friends from back home, or older couples who don’t like ‘these kinds of films.’ And inevitably they call me a week or two later. Or sometimes the very next day. And we talk about the film. About how it made them feel. About how they connected so deeply with characters who were, more often than not, very different from them.
“And I can’t help but think how a movie like this is helping to create a small but sturdy bridge in our extremely divided times. I think about those of us who are trying to find ways to connect with others we don’t fully understand. And I think that a simple, fun way to pitch in to this effort is to simply sit down and watch this film. And let it change you.
“So, please. Go see ‘Moonlight.’ Because the film is simply fantastic. And because, when you’re done, it feels really good to reach out to others and say to them ‘I really want you to see ‘Moonlight.'”

For Ben; A look back on your unforgettable 6th birthday celebration

Last summer, my brother planned the most amazing 6th birthday party (Minecraft themed mini games that all led to a final battle with a Ender Dragon pinata in the backyard, and a huge bounce house in the front yard) for my nephew Benjamin. We captured it all on camera, and here it is. I love my family to the moon and back.

From July 2016, this video is a compilation of all of the different activities that took place to celebrate the 6th birthday of my nephew, Benjamin Auguste Cuhaciyan-Hapke.…

Be the first to know and let us send you an email when P 1 2 3 Productions posts news and promotions. Your email address will not be used for any other purpose, and you can unsubscribe at any time.