Sound Stages, Offices, Screening Rooms and Event Space. Raleigh Studios is More than A Lot! SOUND STAGES
Raleigh Studios is proud to be the longest operating independent studio in the United States, with 100 Years of experience providing the finest production services.

We are a full-service facility that expertly covers every phase of production. Located in the center of Hollywood, our 11-acre studio campus includes 13 sound stages ranging in sizes from 3,200 s.f. to over 16,000 s.f. and over 180,000 square feet of executive and production office space. We provide both services and supplies to cover virtually any production-related need, including lighting and g

We are a full-service facility that expertly covers every phase of production. Located in the center of Hollywood, our 11-acre studio campus includes 13 sound stages ranging in sizes from 3,200 s.f. to over 16,000 s.f. and over 180,000 square feet of executive and production office space. We provide both services and supplies to cover virtually any production-related need, including lighting and g

@thefilmnomads ready to take on 2022!

Checking in with the The Sunshine Kids Foundation at their annual holiday party! 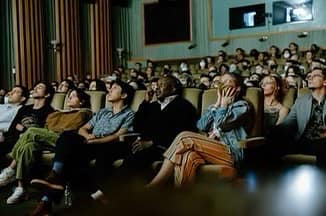 Some awesome shots taken at the ‘From Where it Hides’ screening this past weekend!

Welcome Food&Bounty to the Raleigh Studios Cafe! Join them for a FREE coffee and pastry today!

The festival will feature exciting premieres from Latino filmmakers from the U.S. and around the globe. Go to PIFFLA.com or TELASOFA.com to purchase your tickets today!

MARK YOUR CALENDARS! The Panamanian International Film Festival in Los Angeles is teaming up with The East Los Angeles Film Festival (ELAFF) for TAKE 2. October 7-10 at #raleighstudioshollywood. The festival will feature exciting premieres from Latino filmmakers from the U.S. and around the globe. Go to PIFFLA.com or TELASOFA.com to purchase your tickets today!

From the Samantha Rose Premiere the other night at #raleighstudioshollywood!

Congratulations to all who were involved with the documentary “Unconventional”, which won the award for “Best Inspirational Film” at the Culture and Diversity Film Festival- held at Raleigh Studios on Sunday.

Photos from Once Upon a Lifetime, a feature length film directed by @davidskato, which premiered Saturday evening at Raleigh Studios Hollywood.

A screening and post screening Q&A took place in the Chaplin Theater, with a red carpet and reception at the Raleigh Studios Café.

For more information on how to book your next screening, please visit:
https://raleighstudios.com/screening-rooms/ or email [email protected] The cast of #fromunderthebridgefilm, which premiered Saturday evening at Raleigh Studios Hollywood. Congratulations to Paul James, Connie Jo Sechrist and everyone else involved!

Happy Earth Day!
We would like to take the time to recognize the importance of raising awareness around this day. Let us know how you are celebrating Earth Day!

Another beautiful day at the office! #raleighstudioshollywood

When Jane Lynch tells you to “Take a Stand,” you go ahead and do it. Thanks again, Steven Tyler, for giving us a fabulous cause (and excuse!) to get our stages all dressed up.
#Repost @Steven Tyler's Janie's Fund

It’s not every day that our studio becomes a rock concert... though we often have the pleasure of seeing rockstars, of different varieties!
#Repost @Steven Tyler's Janie's Fund
This day in history… AeroStone was formed & an amazing group of donors, guests, celebrities, and courageous girls gathered at @raleighstudioshollywood in LA for our 2019 Annual #JamForJanie! Together, we raised over $2.8M to give girls and young women the therapeutic care needed to heal and meet their full potential. Thanks to our generous supporters, we continue to move forward in the fight against abuse, and we can’t wait for next year’s Grammy Viewing Party!

From screening important films to teenage makeouts, we miss theaters for all of their important life moments.
#Repost @hollywoodsarchitect
We premiered on PBS SoCal a year ago this past weekend and what a year it has been! The film festivals and now TWO NAACP Image Awards nominations! Wow 💙 #grateful

When we say “blank canvas,” this is what we mean.
#Repost @tamileighshay
New day, new Netflix series.
Here we go!
#moviesets #local44 #work

Whose else read about Roku’s acquisition of Quibi? The entire short-form Quibi catalogue will be free on the Roku Channel, so should we revive this commercial https://www.google.com/amp/s/www.rollingstone.com/tv/tv-news/watch-quibi-online-roku-1111872/amp/?
#Repost @mariorevolori
A #commercial I was lucky to be a part of just came out (during #oscars no less).

Oh to be such a young city and still have so many fabulous stories to tell! Fun fact: historian Marc Wanamaker has had an office on our lot for decades, so if you want more history after reading this story, start googling “Marc W-“!
#Repost @hollywoodviaphotos
Directly across the street from the Raleigh Studios main gate you’ll find the Vivian Apartments (627 N Bronson Ave). Built in 1926, the building oozes old Hollywood vibes in a big way. According to writer/director Geoffrey Gilbert in his short video, VIVIAN SOUTH (2014), the building was named after one of its residents. As the story goes, an aspiring actress named Vivian South moved into the complex in 1949. After getting a few roles at nearby Paramount, she attributed her success to her lucky abode. Vivian went on to marry the apartment manager, who then named the building after her. Actress Vivian South is a no-show on Google. Is it a true Hollywood story? I don’t know, but it sounds good though... The video is available on YouTube...

Our faces as restaurants in Los Angeles reopen today - here’s to staying safe and getting healthier for all!
#Repost @rodinphotography
Millie Bobby Brown ✨

“I'm sick of you little girl and boy groups; All you do is annoy me, so I have been sent here to destroy you,” raps Eminem, and we’re thinking these guys dancing in front of our building represent the boy groups. Give “The Real Slim Shady” official music video another watch, see how many times you can spot our architecture, and let us know if you agree with us on the characters in the lyrics that these guys are meant to portray.

These are smiles that only standing on a 106-year-old film lot can inspire.
#Repost @smile_simonbaker
Regram from @Australians in Film

“Italian Stallions” - we’re calling that a Rocky Balboa reference, and we love to see it. Thanks again for joining us with Gordon Ramsay's F Word!
#Repost @live_laugh_and_cook_italian & @Italian Stallions

“When you enter The F Word’s restaurant on the Raleigh Studios backlot, it looks and feels like a big-city hot spot... — that is, until you gaze up at all the studio lights hanging from the ceiling and the crane rig swooping through the room,” stated Eater in this #throwback article. Question is, have we made studio lights and crane rigs the new standard for fine dining experiences or not?
#Repost @live_laugh_and_cook_italian & @Italian Stallions
Where it all started! ...3 years sure have flown by

Countless filmmakers have arrived for their calltimes to be greeted by this sentry next to our gate - a building that, to us, is synonymous with film and television production and that always seems to whisper “Break a leg!”

Try this on for size: a mask and glasses make everyone look like a famous film actor. Yes or no?
#Repost @evieryland
This was a fun day in recent times standing-in for #katyperry and drinking coffee ☕️ behind my #n95 mask and #FL41 migraine glasses at #raleighstudios on #Stage5

It was an inspiring day of art in America, and Vice President Kamala Harris put it best: “Even in dark times, we not only dream, we do.” Keep on doing, Hollywood!
#Repost @Phillip P Keene
Back to work @Major Crimes #majorcrimes #hollywoodstudios #raleighstudios #buzzwatson

Be the first to know and let us send you an email when Raleigh Studios posts news and promotions. Your email address will not be used for any other purpose, and you can unsubscribe at any time.

Send a message to Raleigh Studios: 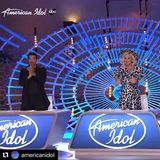 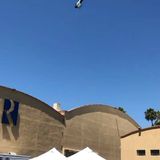 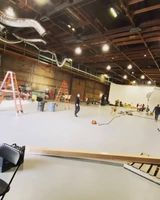 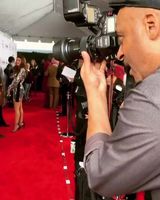 A thing of the past and the coming future, red carpets will never get old. #Repost @Brittney Palmer They said “rock ‘n’ roll chic.” @Steven Tyler's Janie's Fund @Steven Tyler 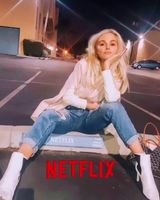 We could watch Steven Tyler hold court (on our lot!) all day every day. #Repost @iamstevent WELL THERE’S ONE WAY TO SHED LIGHT ON THE SUBJECT!!! SEE MORE IN MY STORY! Steven Tyler's Janie's Fund 🎥 by Justin McConney

‪Of all the iconic moments we’ve witnessed, this one is up near the very top. ‬ ‪#Repost @Steven Tyler‬ ‪CATCHING A RIDE TO THE #GRAMMYs ‬ ‪@Aerosmith @Steven Tyler's Janie's Fund ‪FOLLOW MY STORY TONIGHT FOR MORE!!!‬ ‪🎥 by Justin McConney

Of all the iconic moments we’ve witnessed, this one is up near the top. #Repost @iamstevent CATCHING A RIDE TO THE #GRAMMYs @aerosmith @janiesfund FOLLOW MY STORY TONIGHT FOR MORE!!! 🎥 @justinmcconney 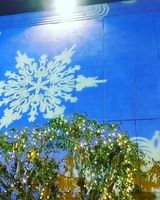 We like our holiday season with (projected) flurries every night. And lots of script readings! #Repost @revolutionaryapplesauce Snow falling outside my reading tonight

“Homecoming” is masterful, and we were thrilled to host this Netflix event about Queen Bey on our lot! #Repost @ivandanielluna Queen let us see this. @Beyonce Nation @Balmain @netflix #homecoming #beychella #beyonce #raleighstudios #netflixfysee

We’re kicking off our amazing series from Poverty Row Films this month with “The Vampire Bat,” because Hollywood loves its celebration of Halloween! The series is curated by the UCLA Film & Television Archive and presented by Raleigh Studios, and it features classic films from the 30s and 40s. Buy tickets here https://www.cinema.ucla.edu/events/2018/down-dirty-gower-gulch-poverty-row-films-preserved-by-ucla and come see these films as they were originally meant to be experienced - in a talkie theater!