The Gold Line Press editorial board does not adhere to any specific aesthetic approach. We seek out voices that deserve to be heard by a larger audience, whether those voices speak in formal or experimental verse and prose. Our chapbooks are created with the intention of producing an elegant, perfect-bound book that is also an art object. Overall, our goal is to showcase exceptional emerging write

The Gold Line Press editorial board does not adhere to any specific aesthetic approach. We seek out voices that deserve to be heard by a larger audience, whether those voices speak in formal or experimental verse and prose. Our chapbooks are created with the intention of producing an elegant, perfect-bound book that is also an art object. Overall, our goal is to showcase exceptional emerging write

@aleherex You’re The Only Friend I Need in @teenvogue today! If you haven’t gotten your copy yet, don’t snooze

We are so excited for this *IN PERSON* event on Friday with @diddioz and Gold Line author @gabrielle_civil ! Hope you’ll join us to hear these experimental lit stars read @poeticresearch at 8 pm.

Gabrielle Civil, whose book ( ghost gestures ) is available now through Gold Line Press, will be reading at Seeds Bursting Open in Fire, a virtual poetry and social justice event to inspire and activate artists and organizers. Check it out on 10/6 at 7pm.

Today is the last day to send us your work! And remember, if you're a nonfiction or fiction writer who isn't sure if your work is a fit, check out our earlier videos. It probably is (maybe especially if you're not sure.)

Send us your work!

You might have a chapbook and not even know it. Check this out, and if you have something that fits, send it on in! Our judge is the incredible Matthew Salesses.

Send us your chapbooks! https://goldlinepress.submittable.com/submit

And also, check out the full interview at CRAFT: https://www.craftliterary.com/2021/01/19/hybrid-interview-matthew-salesses/

Check out this fun interview at Geeks Out with Daisy Hernandez, Gold Line's nonfiction judge this year.

And remember, our chapbook contest closes on 9/15. Send her (and us) your nonfiction. We're also accepting fiction and poetry manuscripts! Find all the details on our submittable page.

One week until our chapbook deadline! Send us your nonfiction, fiction, and poetry chapbooks by the 15th. https://goldlinepress.submittable.com/submit

WHAT IS A NONFICTION CHAPBOOK?

If you think your work might qualify, you should probably send it in.

Working on a chapbook length piece of nonfiction, fiction, or poetry over Labor Day weekend? Send it to our contest! Deadline 9/15. https://goldlinepress.submittable.com/submit

This is from an excerpt of an interview between 2019 nonfiction winner Gabrielle Civil and then-nonfiction editor Marcus Clayton at The Offing, about what inspired her to submit (ghost gestures) to our contest. Our deadline is coming up September 15.

Our nonfiction judge this year is the incredible Daisy Hernandez! Send us along your work! And while you're at it, you can order Gabrielle's book and check out the interview and an excerpt of (ghost gestures) at The Offing.

We have extended our submission deadline to September 15 for chapbook submissions in nonfiction, fiction, and poetry. Send us your work! https://goldlinepress.submittable.com/submit

We are happy to announce, our contest is extended! Please send us your most innovative, boundary-pushing work by September 15.

"(T)ake out the “e” from “reader,” and it’s “radar.” Who has the “radar” to be on the frequency of what it is that you’re trying to do?" A conversation at The Offing between Gabrielle Civil and Marcus Clayton about her Gold Line chapbook (ghost gestures) https://bit.ly/37akzD6

Send us writing that uses the chapbook form in innovative, subversive, and emotionally resonant ways.

We're thrilled to announce our poetry judge for the Gold Line Press 2021-2022 Poetry contest is the incredible Taneum Bambrick! Our call for submissions will be out tomorrow. Stay tuned. But in the meantime, learn more about Taneum.

Taneum Bambrick is the author of Intimacies, Received (Copper Canyon Press 2022) and Vantage (APR / Honickman 2019). Her chapbook, Reservoir, was the recipient of the 2017 Yemassee Chapbook Prize. She is the winner of an Academy of American Poets University Prize, an Environmental Writing Fellowship from the Vermont Studio Arts Center, and the 2018 BOOTH Nonfiction Contest. Her poems and essays appear or are forthcoming in the The Nation, New Yorker, The American Poetry Review, PEN America, and elsewhere. She was a 2020 Stegner Fellow at Stanford University, and has received scholarships from the Sewanee Writers’ Conference, and the Bread Loaf Writers’ Conference. She is currently a Dornsife Fellow of Creative Writing and Literature at the University of Southern California.

We're so so so so so very excited to announce that our fiction judge for the Gold Line Press 2021-2022 Chapbook prize is @m.salesses ---- Matthew Salesses!

MATTHEW SALESSES is the author of the bestsellers The Hundred-Year Flood, an Adoptive Families Best Book of 2015 and a Best Book of the season at Buzzfeed, Refinery29, and Gawker, among others, and Craft in the Real World, an Esquire Best Book of the 2021, which explores alternative models of craft and the writing workshop, especially for marginalized writers. His latest novel is the PEN/Faulkner Finalist Disappear Doppelgänger Disappear, a Thrillist.com Best Book of 2020. Previous books include I’m Not Saying, I’m Just Saying; Different Racisms: On Stereotypes, the Individual, and Asian American Masculinity; and The Last Repatriate.

Matthew was adopted from Korea. In 2015 Buzzfeed named him one of 32 Essential Asian American Writers. His essays can be found in Best American Essays 2020, NPR Code Switch, The New York Times Motherlode, The Guardian, and other venues. His short fiction has appeared in Glimmer Train, American Short Fiction, PEN/Guernica, and Witness, among others. He has received awards and fellowships from Bread Loaf, Glimmer Train, Mid-American Review, [PANK], HTMLGIANT, IMPAC, Inprint, and elsewhere.

Matthew is an Assistant Professor of Creative Writing in the MFA/PhD program at Oklahoma State University. He earned a Ph.D. in Literature and Creative Writing from the University of Houston and an M.F.A. in Fiction from Emerson College. He serves on the editorial boards of Green Mountains Review and Machete (an imprint of The Ohio State University Press), and has held editorial positions at Pleiades, The Good Men Project, Gulf Coast, and Redivider. He has read and lectured widely at conferences and universities and on TV and radio, including PBS, NPR, Al Jazeera America, various MFA programs, and the Tin House, Kundiman, and One Story writing conferences.

Gold Line Press is so thrilled to announce that our nonfiction judge for the 2021-2022 contest is Daisy Hernandez! Stay tuned for our upcoming call for details on submitting to our nonfiction chapbook contest.

Daisy Hernández is the author of The Kissing Bug: A True Story of a Family, an Insect, and a Nation’s Neglect of a Deadly Disease (Tin House). She’s also the author of the award-winning memoir A Cup of Water Under My Bed (Beacon Press) and coeditor of the anthology Colonize This! Young Women of Color on Today's Feminism (Seal Press). She is an Associate Professor in the Creative Writing Program at Miami University in Ohio.

Last, we're happy to announce our fourth and final editor: our 2021-2022 Nonfiction and Publicity Editor, and runner of these here social media accounts, is Seth Fischer.

He is a Dornsife PhD Fellow in Creative Writing and Literature at the University of Southern California. His essays and stories have been published in Ninth Letter, Zocalo Public Square, Guernica, The Rumpus, Joyland, and elsewhere, and his nonfiction has twice been listed notable in The Best American Essays. He’s also received fellowships and residencies from Lambda Literary, Jentel, Ucross, Ragdale, and elsewhere. Find out more about his work at www.seth-fischer.com.

Next week, we'll be announcing this year's judges. Spoiler: They are more than kind of amazing.

We're thrilled to announce our 2021-2022 Poetry and Distribution Editor is the wonderful Sara Fetherolf (she/they). She is a poet, essayist, storyteller, and librettist, whose work has appeared in Muzzle, Iron Horse, Indiana Review, The California Journal of Poetics and Plath Profiles, among others. She is the winner of an Academy of American Poets Prize, and the Cloudbank Poetry Prize. She holds an MFA degree from Hunter College, and is currently a PhD candidate in Literature and Creative Writing at University of Southern California. She lives in Long Beach.

Be the first to know and let us send you an email when Gold Line Press posts news and promotions. Your email address will not be used for any other purpose, and you can unsubscribe at any time. 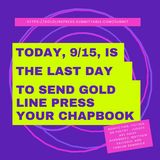 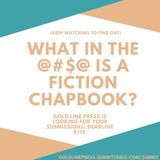 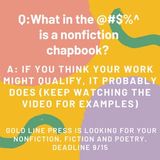 WHAT IS A NONFICTION CHAPBOOK?

https://www.facebook.com/OdettaInc/posts/3170235573039908
Alejandro Heredia will be one of the featured readers at 2x2: A Reading Series. Alejandro is a 2019 Dreamyard Rad(ical) Poetry Consortium Fellow and winner of the Gold Line Press 2019 fiction chapbook contest, selected by Myriam Gurba. Sun, 3 pm PT. Come join us! Presented w/ ONE National Gay & Le***an Archives. Register: www.tinyurl.com/2x2readingseries
Check out Volume 4 of the Indie Lit Fair, presented in partnership with PEN World Voices Festival! This installment features Baltimore Review, Belladonna* Collaborative, Black Ocean, Broadsided Press, Fonograf Editions, Frayed Edge Press, Futurepoem, Gold Line Press, Green Writers Press, River Styx Literary Magazine, Swamp Ape Review & more! https://pen.org/indie-lit-fair-vol-four/
Join us this Sunday, June 28th, at 3pm PDT for Q***r Aesthetics (Looking Forward), the first of the new 2x2 Reading Series from Gold Line Press and Ricochet Editions. Poet Roy Guzman will moderate this series with writers Kazim Ali, Stephen Van Dyck, Angie Sijun Lou, and Alejandro Heredia, all of whom will present work that speaks to the state of q***r literature today. Learn more about each writer and register for this event here: https://one.usc.edu/program/q***r-aesthetics-looking-forward Through this discussion, the writers will answer the following: What are the limitations of q***r literature’s focus on identity politics? And what possibilities exist for expanding beyond these bounds to address some of the many urgent issues brought about by late stage capitalism?
Alarming facts are coming about Coronavirus. All you need to know about Coronavirus is right in this article. We all must keep ourselves safe from this pandemic. How Bad Is the Coronavirus? https://medium.com/@tomaspueyo/what-you-can-do-to-curb-the-coronavirus-9f878d5982f2 Mr. Tomas Pueyo is a Growth, Product and Marketing leader. He is an author, a TEDx speaker and currently works as the VP of Growth with CourseHero He has two MSc in Engineering from top European schools and an MBA from Stanford University. He is passionate about self-development and constant learning. He has authored some very informative and interesting articles , which can be read on the link https://blog.usejournal.com/@tomaspueyo
📯The deadline for the Gold Line Press Chapbook Contest is now extended to Sept. 1st! For more info on submission, go here:
ACCEPTING SUBMISSIONS