www.crickettogether.com Cricket Media® is a global education company creating high-quality print and multi-media products for children, families, mentors, teachers, and partners that improve learning opportunities for everyone. Led by our 11 award-winning children’s magazines and our customizable research-tested collaborative learning platform, we are committed to creating and supporting innovativ

www.crickettogether.com Cricket Media® is a global education company creating high-quality print and multi-media products for children, families, mentors, teachers, and partners that improve learning opportunities for everyone. Led by our 11 award-winning children’s magazines and our customizable research-tested collaborative learning platform, we are committed to creating and supporting innovativ

#MakeItMonday! What do you do when it's hot enough outside to cook a pizza? You cook a pizza, of course! Try this awesome 'solar pizza oven' activity from SPIDER Magazine sometime this summer!

The Importance of Learning a Heritage Language

What drove you to choose the language you’re learning? Was it to succeed in the workplace or communicate better with your neighbors? A memorable vacation or a favorite TV show? Or were you inspired by your own heritage? One term you’ll hear a lot in discussions about language

It's blueberry season! Have you gone to a "pick your own fruit" farm? If not, you definitely should. Have a great weekend, everyone.

Yesterday, the Scripps National Spelling Bee returned, dazzling us all with the intellectual feats of kids across America! If you have an aspiring future spelling bee champ in your family, here are some tips to help them on the road to success!

It’s one of the few times of the year that your academically-inclined youngster can turn on ESPN and see kids like them celebrated like sports stars. The Scripps National Spelling Bee has been running for over 90 years with no signs of stopping, and children around the country dream of taking home...

Congratulations, Harini! What an achievement!

Harini Logan, an eight-grader from Texas, won the 2022 Scripps National Spelling Bee in an inaugural spell-off.

#ThrowbackThursday! This illustration by Leo and Diane Dillon appeared on the cover of the June 1979 issue of CRICKET magazine.

The husband-and-wife illustrator team published over 100 book and magazine covers over their 50-year career and won the Caldecott medal two years in a row with 1976's "Why Mosquitoes Buzz In People's Ears" and 1977's "Ashanti To Zulu: African Traditions."

This summer is the perfect time to learn a new language! NeuLingo's virtual summer camp is open for registration now. Learn more: https://learn.fluentcity.com/neulingosummer/

Some of us are a little scared of math, but the truth is, math can often help us OVERCOME our fears. Be honest, were you ever scared of the Bermuda Triangle? Here's how statistics proved there's really nothing to worry about in that infamous region.

MUSE is a magazine for tweens who are curious about STEM, the universe, and everything! Explore MUSE Magazine: https://bit.ly/3N2SCjN

Still a little scared of math even if you're no longer scared of the Bermuda Triangle? Cricket offers one-on-one virtual math tutoring for K-12 students. Brush up math skills with us today: https://bit.ly/3a4pOJ3

Have a wonderful and meaningful Memorial Day, from our Cricket family to yours!

What's your style of cleaning up, powering through and getting it done, or dragging your feet and drawing it out? No matter how you do it, it has to get done, right?

Want to take the perfect photo? Get these three settings right with your camera and then point and shoot! Do you have any photography tips to share?

#ThrowbackThursday! Make some music today! This charming cover art from May 1975’s issue of CRICKET is by Irene Haas, a children’s author and illustrator best known for A SUMMERTIME SONG, THE MAGGIE B., and LITTLE MOON THEATER.

May is Asian American and Pacific Islander Heritage Month, and we're sharing some free stories from our children's magazines, many of which feature children learning about their families' heritage and traditions!

Are you a vegetable, animal, or fungus? Take this quiz from ASK and find out for yourself!

April showers bring May flowers... and vegetables and fruits, too! Is there a community garden near your family? This poem by Joan Riordan appeared in the latest issue of LADYBUG Magazine.

Get more from LADYBUG: https://bit.ly/3wIRT1l

Haiku are poems written in a style created over 400 years ago in Japan! This week's storytime will help you write Haiku of your own https://youtu.be/Z5v6hfmKYvU

#MakeItMonday! It's hard to be in a crabby mood when you're wearing a hat that looks like a crab. This simple craft from SPIDER Magazine will guarantee belly laughs from the whole family!

Get more from SPIDER: https://bit.ly/3GaAiT6

How about a game of I Spy to take you into this lovely weekend? Enjoy this artwork by Shirley Beckes

If someone described Old Faithful to you, but you saw no footage or image to prove its existence, would you believe it was real? That's what a lot of Americans faced in the 1800s. Thank goodness for photographers! Check out some photographers who helped Americans experience some of the most amazing sights in the country! https://bit.ly/3wH6mcO

#ThrowbackThursday! This cover art from the May 1974 issue of CRICKET was created by Dutch illustrator and sculpted Friso Henstra. This illustration also appeared on the beloved CRICKET AND OTHER FRIENDS album! Does anyone still own it?

It might just be the coolest holiday that you've never heard of. Join us for our next NeuLingo open course tomorrow, May 19th, to learn all about the Dragon Boat Festival! Open to kids ages 5-16: https://bit.ly/3FjgE6X

Today is World Baking Day! What are you and your family going to make today?

This storytime/recipe mashup from CRICKET gives us a pretty good idea about what lunchtime in Japan is like! Written by Motoko Welsh with art by Huy Voun Lee https://youtu.be/5j1t6pqQJts

#MakeItMonday! The latest issues of FACES and COBBLESTONE are all about photography. So how can you take great photos of your own? Here are some tips from FACES Magazine!

Weekends are for fun in the sun! What's most relaxing for you, wind in your hair or sand between your toes?

If you're scared of the number 13, you might have triskaidekatriaphobia. If you're scared of TODAY's date, Friday the 13th, you might have paraskevidekatriaphobia! Funnily enough, these fears affect about... 13% of Americans! But Friday the 13th isn't considered bad luck everywhere in the world! In China, 13 is a lucky number. So let's make today a lucky day!

Breaking news: This isn't a bad photo of a donut cooking, it's an amazing photo of a black hole at the center of our galaxy!

Our current issue of MUSE Magazine features an articles about this black hole and the astrophysicist who discovered it, Andrea Ghez! Check it out https://bit.ly/3NaXzGR

The Event Horizon Telescope has once again caught sight of the “unseeable.”

Spend the summer learning a new language-- and having lots of fun! This virtual summer camp for ages 5-16 is a great way to learn Mandarin. No experience required! Register now: https://bit.ly/3stuleh

Want a blanket, raincoat, snowsuit and stylish jewelry all in one? Grow some feathers! Check out this article from CLICK about the amazing things feathers do for birds https://bit.ly/3N4Du53

How many friendly animals can you find in this sweet little poem from LADYBUG Magazine?

The Terrible Kites of Len Yo | CRICKET Magazine Storytime

#MakeItMonday! Maybe escargot isn't quite your thing, but these adorable snail-shaped cinnamon rolls are a crowd pleaser!

Get more from SPIDER Magazine: https://bit.ly/3OCJK5y

Happy Mother’s Day! Mothers are some of the first teachers in our lives!

Weekend's here! How's the weather looking where you are? Nice enough for playtime with your favorite kiddo? We sure hope so!

🚀 It's National Space Day! Fuel kids' passions for science with intriguing facts, engaging discoveries and hands-on activities. Get 50% off of all STEM-focused magazines: https://bit.ly/3LRoEyt

Be the first to know and let us send you an email when Cricket Media posts news and promotions. Your email address will not be used for any other purpose, and you can unsubscribe at any time.

Send a message to Cricket Media:

Invent It Challenge Step 4: Create It!

Be a Game-Changer With the 2021 Invent It Challenge

Invent It Challenge Step 3: Sketch It!

Invent It Challenge Step 2: Explore It!

Invent It Challenge Step 1: Think It! 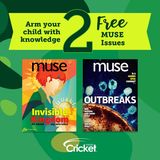 The best way to feel safe is to arm yourself with knowledge. The Wuhan coronavirus is all over the news right now, cold and flu season continues to rage on, and it's sometimes difficult to separate fact from fiction about how viruses spread or how to treat them. If we're confused, imagine how our kids must feel! As part of this special offer, we’ll send you two highly relevant issues of MUSE Magazine to help your children (and you) understand how viruses work. With a look at infectious diseases and outbreaks throughout history, a deep-dive into what germs are and what they do, and plenty of helpful and proven tips to keep you safe and healthy, this set of MUSE Magazines offer more than just an entertaining and engaging way to learn—they offer pure peace of mind. Shop now: https://bit.ly/2Pe0d37

EWeek Daily Challenge: Day 6! Help us spread the word! Challenge your friends to join us for the next session of TryEngineering Together! Share this video and link to invite others to inspire the next generation of #engineers: https://bit.ly/2SD1KjX #EWeek2020 #EWeekTogether

We're sitting down to chat with a real electrical engineer who knows everything there is to know about wind power! Do your kids have questions they'd like to ask an engineer? They can email us at [email protected] (along with their first name and where they're from), or post their questions right here in the comments of this video!

We're sitting down to chat with a real aerospace engineer! Do your kids have questions they'd like to ask an engineer? They can email us at [email protected] (along with their first name and where they're from), or post their questions right here in the comments of this video!

Ryan, Luke, and their parents were kind enough to send us a video of them making #slime! They used the recipe found in the October 2018 issue of ASK Magazine, which is all about the ooey gooey green stuff! You can download the slime recipe here and try it out for yourself. This slime recipe is easy, safe, and perfect for kids who like hands-on activities. http://bit.ly/2Yu8eDF If you're feeling fancy, you can spice up your slime with these additional recipes including glitter, foam, and googly eyes! http://bit.ly/2XiLjKc

"I love this program because I'm able to do it at work and be able to connect with kids without needing to find extra time in my day." A Northrop Grumman Corporation eMentor shares her experience with TryEngineering Together, a STEM eMentoring program by Cricket Media and IEEE. Learn more about TryEngineering Together: https://bit.ly/2FzvbwL

This one is for all the dads out there! #FathersDay is this Sunday, so please enjoy this sweet story from LADYBUG "Avocados for Sale" by #CaseyBuonaugurio with art by #IsabelRoxas

Inventing is a process of trial and error, which means that any inventor's bound to make a few mistakes! 2019 #InventItChallenge winner Sophia (14-21 solo category) included this funny blooper reel video along with her invention, the Helping Hand! Come check out her full presentation here and vote for your favorite for the ePals Choice Award by May 16 at midnight EST: https://bit.ly/2PKFX84 #IIC2019

A little something for mom. #HappyMothersDay

The 2019 #InventItChallenge winners have been announced! Even the youngest students have submitted brilliant inventions. Check out the Pop Out Stairs, created the winners from the 5-7 team category, Ava and Rosemary! Vote your favorites for the ePals Choice Award: https://bit.ly/2PKFX84 #iic2019

Other Publishers in McLean