You can ask questions on the wall too.

What's your no. 1 movie song of the '60s? 🍿 Vote for your favorites of the decade, then tune into the countdown on SiriusXM 60s Gold. siriusxm.us/60sMovieSongs

Hear special remembrances of and music from the legendary lead singer of the Ronettes.

Vote for your favorite autumn songs from the ’60s, then hear them Thanksgiving weekend

SiriusXM 60s Gold updated their information in their About section.

SiriusXM 60s Gold updated their information in their About section.

Vote for your favorite autumn songs from the ’60s, then hear them Thanksgiving weekend

SiriusXM’s ’60s on 6 (Ch. 6) wants to know what your favorite autumn releases from the ’60s are. After you vote, tune in all Thanksgiving weekend to hear them counted down.

Be the first to know and let us send you an email when SiriusXM 60s Gold posts news and promotions. Your email address will not be used for any other purpose, and you can unsubscribe at any time.

Today, it's the 3 Stooges with Shotgun Tom as Moe, Pat St. John playing the part of Larry, and Curly being played by Phlash Phelps. SIRIUS XM 60's on 6 Welcome and "Hello" 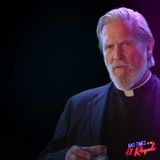 Jeff Bridges of Bad Times at the El Royale will be playing his favorite 45s this weekend! Tune in live today at 10am: https://siriusxm.us/JeffBridges60son6 #ElRoyaleMovie 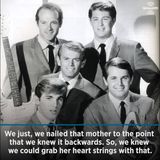 Good Vibrations: The Beach Boys Channel - How the band got money for instruments

The Beach Boys started a band without owning any instruments! Undeterred, Al Jardine had a plan. Hear how they convinced his mom to lend them a month of her salary to rent instruments. 🎸🎹🥁 Hear more stories like this on Good Vibrations: The Beach Boys Channel on Ch. 4 🎶 Listen now: https://siriusxm.us/2xolvV4 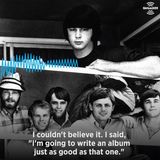 Brian Wilson wanted to write an album as good as The Beatles' Rubber Soul. Hear how he went about it. Hear more stories like this on Good Vibrations: The Beach Boys Channel on Ch. 4 🎶 Listen now: https://siriusxm.us/2kCz0ap 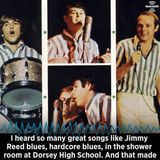 The Beach Boys grew up hearing the blues, doo-wop, R&B and early rock 'n' roll, all styles that later influenced their songs. What genres of music did you hear as a teen? Hear more stories like this on Good Vibrations: The Beach Boys Channel on Ch. 4 🎶 https://siriusxm.us/2kzXoK8 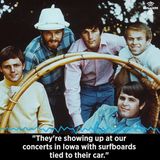 No. 1 Surfing Band in America, no beach required 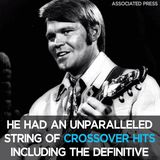 Glen Campbell has passed away

Rest In peace Rhinestone Cowboy 💔 Glen Campbell has passed away at 81. We'll be playing audio tributes to the musician throught the week. https://siriusxm.us/2vC9qto

Good Day Sunshine! 50 years ago, The Beatles released one of their most iconic albums: Revolver. How well do you know it? If you aced the video quiz, take the full quiz on the SirusXM blog.

This week on Gettin’ Together…Tommy spins a garage band classic by a band that began its career performing live as another hit making act…plays an iconic British group’s debut single which was a direct steal of an American R&B record….and reaches back for a rarity by three New York producer/songwriters who passed themselves off as Australian sheep farmers. Tune in this Sunday, 5-8pm ET / 2-5pm PT on SiriusXM 60s Gold! Wishing everyone a great weekend ☮️ 💜
And so we come to another Phriday. It’s been Phlash-filled with great music (like The Cyrkle) and conversations with Janine Stange reminding us that March 3 was the anniversary of the Star Spangled Banner becoming our National Anthem. Long may she wave. Have a good weekend Phan Clan.
Remembering Dusty Springfield, the talented artist that we lost on March 2nd in 1999. Dusty had twenty one studio albums, one live album, thirty compilations, four EP's and sixty-nine singles, some of which were unreleased. Dusty was a 60's icon and during that time she ranked among the most successful British female performers on both sides of the Atlantic with signature songs "I Only Want to Be with You", "You Don't Have to Say You Love Me" and "Son of a Preacher Man" - all of which were Top 10 in both the UK and the US. Here's Dusty's version of the Jimmy Webb song, "Mixed Up Girl". https://www.youtube.com/watch?v=SZDzccUsjY0 The Official Dusty Springfield Fan Club * #dustyspringfield 60s Music * 60s Music * 60s Music * 60s Music * Music of 60's & 70's * 50's and 60's Music History * SiriusXM 60s Gold * The Official Fan Club For '50s and '60s Music * The Wonderful 60's, 70's ,80's & 90s * Beat Girls! (Britain's Rockin 60s Females) * 60s Girls + * Feel-Good 60s Hits * #60smusic #60sfemales #iconsofthe60s #british60s
Always happy when Monday rolls around and Phlash Phelps is on SiriusXM 60s Gold!
Wow Phebruary phlew by. I’m looking phoward to what Phlash Phelps has to bring us in March. He’s always Phun and interesting. Have a great week Phan Clan!!!!
Very sad to hear that Tommy James' wife has passed away 😢 https://www.facebook.com/TJandtheShondells/posts/499750074842222
The days just raced by with ice storms and dangerous roads. Hunkering at home was made a lot easier listening to Phlash Phelps on SiriusXM 60s Gold. Stay saphe Phan Clan. Spring is out there somewhere!
It’s a Phlash Phelps Phill In Monday. Hi Mike Kelly ! Nice to hear you.
https://open.spotify.com/episode/7sJ6EsbMEcfz2g4aSDljWB?si=IbO67EuqQhWNrrqK66uAaA&utm_source=copy-link
On this week's all-new Gettin' Together...Tommy revisits the revolutionary shift from singles to albums in the 1960s...talks about the beginnings of a superstar group...and spins an iconic rock "n" roll record. Tune in Sunday, 5-8pm ET / 2-5pm PT on SiriusXM 60s Gold! Enjoy the weekend, everyone!
Phriday has rolled around once again. And once again Phlash Phelps has helped those of us dealing with phrigid cold and ice get through the week. Iph you’re on the road, drive carephully. Enjoy your weekend Phan Clan!
Today Feb 17 - in 1966 - Nancy Sinatra was at #1 on the UK singles chart with "These Boots Are Made For Walking", written by Lee Hazlewood. It also reached #1 in the US on the Billboard Hot 100. It was Nancy's first #1 recording and featured some of the session musicians known as The Wrecking Crew. Nancy Sinatra fan club * NANCY SINATRA * Nancy Sinatra fan club * Nancy Sinatra Fan Group * 60s Music ! Wow ! I love the sixties * 60s Music * Patchouli, Love and The Music of the 60's and The 70's. Group * Take Me Back To 60's, 70's, 80's & 90's Music * SiriusXM 60s Gold * 60's,70's,80's,& 90's Music Revival #nancysinatra #franksinatra #nancysinatrafans * Do you remember the 60s,70s & 80s * The Wonderful 60's, 70's ,80's & 90s #60smusic https://www.youtube.com/watch?v=m2fPkzJsMU8