💎 Listen to this album on YouTube: https://www.youtube.com/watch?v=iTUq5NwDCRQ
🎵 Stream or purchase this album here:: https://brilliant-classics.lnk.to/KozeluchPiano4HandsFA

The recent Kozeluch revival, featuring recordings of his solo, chamber and orchestral music, has demonstrated his status as one of the most important figures in the whole of Viennese Classicism. This double album dedicated to Kozeluch’s works for fortepiano four-hands provides further confirmation of his compositional mastery, on a level bearing comparison with his contemporaries.

Leopold Antoniìn Kozeluch was born on 26 June 1747 in Velvary, to the north-west of Prague. He began his musical career in 1771 as a composer of ballet music and in 1778 decided to abandon the study of the law and to move to Vienna, where in a short time he was able to establish himself as a composer and performer thanks to his indisputable musical qualities and his ability to cultivate good relations to sustain and expand his activities. In 1792, after the death of Mozart, Emperor Franz II invited to him to take up the post of Kammer Kapellmeister and Hofmusik Compositor (it would appear at double the salary Mozart had received); Kozeluch remained in this post until his death in 1818.

Building upon stylistic influences inherited from his teacher František Xaver Dušek (the first Czech composer to approach the four-hands piano genre in a manner neither frivolous nor didactic), Kozeluch committed himself to composing for keyboard duo, raising its aesthetic and technical level and contributing to the evolution of a concert hall repertoire worthy of the same attention as solo sonatas.

The large-scale works were recorded on an original fortepiano constructed in Vienna by Johann Schantz in the early years of the 19th century and therefore contemporary with Kozeluch. The Duo Op.19 and Trio Sonatas Op.12 Nos. 1 and 2, with their domestic character, were recorded on the Longman & Broderip square piano, a type of instrument extremely popular in the households of the day and therefore appropriate for Hausmusik.

Performed by Marius Bartoccini and Ilario Gregoletto, both specialists of historic instruments and avid researchers of forgotten repertoire.

🎬🎮 Our music is available for sync licensing in videos, films, tv-shows, games, advertising and more. For more information and to request a license go to: https://www.brilliantclassicslicensing.com/

Tune in today at 11:03 AM (CET) and listen to our concert with conductor Tugan Sokhiev and our principal harpist ANNELEEN LENAERTS via live stream on Ö1: https://bit.ly/3MhpnZM
The program features Reinhold Glière’s Harp Concerto, op. 74 and Tschaikowsky’s Symphony No. 4 in F Minor, op. 36.

The live stream is available worldwide for 7 days!

🎶 So happy to be joining my dear friend and colleague, Isabel Leonard, as she makes her role debut as CARMEN at Washington National Opera. And for me, it will be my company debut! We are joined by the incredible team of Ryan Speedo Green as Escamillo, Vanessa Vasquez as Michaela, in a production directed by the world renowned Francesca Zambello, under the baton of Evan Rogister. Come see us- let us know when- we’d love to say hello. 🎶

We are excited to share that our MET Orchestra Musicians have donated $17,000 directly to the National Opera House of Ukraine. Donations from the Met Orchestra, the Met’s music staff, and a significant contribution from Music Director Yannick Nezet-Seguin were raised with the hope that it will inspire other musical institutions around the world to join this vital fundraising initiative and collect donations for Ukrainian musicians, orchestras, and musical organizations.

We also encourage continued donations to relief efforts, which can be made through the Ministry of Foreign Affairs of Ukraine website.

Ariadne auf Naxos’ premiere is approaching. On 15 April Sven-Eric Bechtolf’s production makes its debut under the baton of Michael Boder. Strauss’ opera with the libretto by von Hofmannsthal tells about the peculiar night at the house of a wealthy man in Vienna, who decides to give his guests with an opera seria and a farsa. Due to the length of the dinner, he decides to merge the two performances into a single one.

The Prologue describes the preparation of the absurd performance and sees a young and unrealistic composer confronting Zerbinetta, a mischievous actress. At the end the opera is staged: Ariadne auf Naxos presents the encounter between the abandoned Ariadne and the god Bacchus enrich by Zerbinetta who joyfully expounds her fatalistic vision of love.

We have a new member of the Horn section! Please give a big warm welcome to Fourth Horn Jonathan Maloney. Jonathan has already played his first concerts as a Member in London and on tour, so you might have already seen him on stage - you can next see him in London on 10 and 24 April.

We caught up with him for a chat: https://lso.co.uk/whats-on/alwaysplaying/read/1806-welcome-to-our-new-lso-horn-jonathan-maloney.html

Be the first to know and let us send you an email when ERTV TVer Classical Music Opera posts news and promotions. Your email address will not be used for any other purpose, and you can unsubscribe at any time. 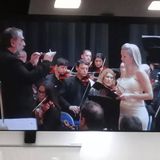 Other TV Channels in New York