To our wonderful and valued followers -

We're terribly sorry for the inconvenience, but due to circumstances beyond our control and related to the coronavirus pandemic and the attendant shut-downs of various public locations, the Comics Pull List will be on temporary hiatus until further notice. We expect to be back up and running in early April, but of course we'll see how things go until then. So our weekly NCBD posts won't be happening at least for the next three Wednesdays (that's March 18, March 25, and April 1). If all goes according to plan, we should be back in the 2nd week of April. Make sure to wash your hands and stay safe, everyone!

It's Mongul versus Superman in the battle for the survival of the United Planets! The Man of Steel must confront Mongul in front of all the powers of the galaxy, or peace will never be achieved. During one of the most private moments in Superman's existence comes one of his biggest challenges. If Superman fails, the whole of the United Planets falls!

Rai and the Eternal Warrior fight in a bloody war against Bloodfather's forces in the battle for Hope Springs.

Secrets will be revealed as a new truth is discovered about Rai! What has he been hiding?

SERIES PREMIERE! For decades, Stealth has waged war on crime in Detroit, but now he's taken his pursuit of justice too far. Only reporter Tony Barber knows that behind Stealth's reckless behavior is an older man battling Alzheimer's - his father. A father unwilling to accept that he's no longer the hero this city needs... with enemies all too eager to force his retirement. Created by ROBERT KIRKMAN and MARC SILVESTRI, STEALTH is an action-packed series, perfect for readers who enjoy Black Panther and Iron Man.

Just as b.b. begins to feel safe at the home of her friend and fellow radio show host, Chulita, danger arrives in the form of b.b.'s father. Somehow, he has followed her, and her presence has endangered Chulita's family. Together with her best friend, b.b. has no choice but to make a run for it - but will she ever truly be safe?

• Spider-Man needs to know WHAT BOOMERANG IS UP TO and he (and you) will finally get their answers this issue!
• What does it have to do with Mayor Kingpin?
• And who are all those eyes looking at our hero and his lousy roommate?

NIOBE: SHE IS DEATH #3 (Stranger Comics)

Niobe must remember her past and choose between the mother whose voice is now silent and the father who beckons. Only then can she defeat the silver king... and become a queen.

Elmer Fudd is out to shoot some animals, only he's not hunting-he's working as a nature photographer for a famous magazine. But when Daffy finds out that he's more interested in capturing a photo of a "wabbit" than a certain handsome duck, Elmer's job is going to get a lot more challenging.

NEVER BETRAY A BOUNTY HUNTER - ESPECIALLY IF IT'S BOBA FETT!

Years ago, VALANCE and fellow bounty hunters BOSSK and BOBA FETT took on a mission that went sideways in a bad way after Valance's mentor, NAKANO LASH, violently betrayed them. Valance's team barely escaped with their lives. He never thought he'd face his old mentor ever again...until Lash finally resurfaces under mysterious circumstances. Every bounty hunter in the galaxy wants a piece and Valance is hell-bent on getting to the prize first. He has score to settle-but so does Boba Fett!

ETHAN SACKS (OLD MAN HAWKEYE and GALAXY'S EDGE) and PAOLO VILLANELLI (VADER: DARK VISIONS and JEDI FALLEN ORDER - DARK TEMPLE) are teaming up to bring you the bounty hunter adventure you've been waiting for this March!

Agent 007 is a loner, by nature. But finally, he accepts that he needs help. But will trusting someone else help his mission...or lead to the deaths of innocents? 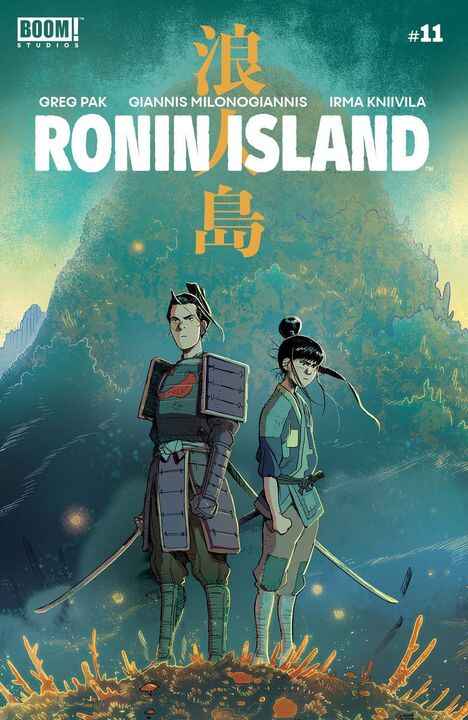 The war for the Island rages on-but in the heat of battle, will neither side open their eyes to the true threat bearing down on them, in the form of the Byonin?

• The conclusion to SPIDER-VERSE is here!
• All the various threads of this series (Miles Morales, Spider-Man Noir, SP//dr, Webslinger, Spider-Ma'am, and all the other Spider-People and Spider-Sonas) come together to re-spin the Web of Life and Destiny!
• But the journey won't be easy, so don't be surprised if all the spiders don't make it through alive!

The Justice League suffers defeat after defeat in the ever-tightening grip of the Eradicator. But do the heroes have a greater plan? It's up to the Flash to outwit and outrun the onslaught of Daxamites, but his next step may be his last.

Years ago, humanity became the "alien invaders" when the sky was lit up by a portal to the world of Tassaroth. Finding a medieval society with rich resources, the "Earthers" soon took advantage and occupied the planet. Today Vin Raja, the chieftain of the Drakkaran nation, leads an armed assault upon an Earther outpost. He will show no mercy to other natives who have sided with the Earthers. Vin Raja is a great warrior but has a dark secret; a secret that threatens to be exposed when his daughter breaks her house arrest with her mysterious twin children.

The epic continues. Sonja is queen but has nothing. She will wager everything to save her people. From MARK RUSSELL (Year of The Villain) and BOB Q (Captain America).

And if you read Red Sonja, be sure to pick up KILLING RED SONJA #1, on sale in March.

MURDER AND MYSTERY IN THE MIGHTY MARVEL MANNER!

As the specter of war looms on the horizon, SPIDER-MAN: NOIR fights the good fight at home, stopping the injustices of a more friendly-neighborhood variety. But after a dame is murdered at The Black Cat nightclub and all clues point overseas, Spidey will have no choice but to board the next flight to Europe and kick off a globetrotting adventure through yesteryear of the Marvel Universe!

Thirty years ago, Alex Ross had a vision of a new series showing the Marvel heroes in a way they'd never been seen before. The first realization of that idea became the blockbuster MARVELS - but today Alex finally brings about his original vision: An anthology of stories by unique, exceptional talents, many of whom are doing Marvel characters for the very first time. Over this showcase series you'll see work by such artists as Adam Hughes, Bill Sienkiewicz, Dan Brereton and more, linked together by an overarching story by Alex and Steve Darnall.

This inaugural issue kicks it all off with superstar artists Frank Espinosa (Rocketo, Looney Tunes) telling an unusual Spider-Man story and Steve Rude (Nexus), teaming up with Kurt Busiek (Marvels, Avengers) for an Avengers story, framed by Alex and Steve Darnall (Uncle Sam, Marvels) presenting a tale of the dread dreamland Nightmare, and his threat to the entire Marvel Universe...and possibly beyond.
A once-in-a-lifetime assemblage of talent - you won't want to miss a single page!

A savage satire reuniting the critically acclaimed team behind DC's The Flintstones, Mark Russell (Second Coming) and Steve Pugh (Harley Quinn: Breaking Glass), in an all-new creator-owned series! Welcome to Billionaire Island, where anything goes...if you can afford it. But the island's ultra-rich inhabitants are about to learn that their ill-gotten gains come at a very high price. Every AHOY comic also features extra prose stories and illustrations.

After winning five Eisner Awards and topping year-end "best of lists," the comic book of 2019 was Mister Miracle. The comic book of 2020 will be Strange Adventures.
The Mister Miracle team of writer Tom King and artist Mitch Gerads are joined by fan-favorite artist Evan "Doc" Shaner to bring you an epic tale in the tradition of Watchmen, The Dark Knight Returns, and DC: The New Frontier-a story of blood, war, and love that readers will be talking about for years to come.

Adam Strange is the hero of Rann, a man famous throughout the galaxy for his bravery and honor. After leading his adopted home to victory in a great planetary war, Adam and his wife Alanna retire to Earth, where they are greeted by cheers, awards, and parades. But not all is as happy and nice as it seems, as the decisions Adam made during battles on Rann come back to haunt his family and threaten the entire DC Universe. And now a surprise DC hero will have to choose between saving Adam Strange and saving the world.

A story like no other, Strange Adventures is an ambitious, thrilling, shocking, and beautiful 12-issue saga that will push Adam Strange to the breaking point-and beyond!

The Future. Ultra-modern megacities reward millions of their citizens with a completely funded life, with every need met, from food to housing and healthcare, in order to com-pete in an economic power struggle in which population is key.
But a few rural residents still cling to their independence in what last American small towns are left. When a nearby megacity pressures the people of a small town join up or else, a young teenage girl named Clem will learn how far she'll go to defend her prin-ciples.

Written by Zack Kaplan (LOST CITY EXPLORERS) with art from Piotr Kowalski (Port of Earth, Eclipse, S*x, Marvel Knights: Hulk, The Dark Tower), JOIN THE FUTURE is a sci-fi western that examines a future where everyone must ask what your values are truly worth.

A SORCERER SCHOOL FOR THE MARVEL UNIVERSE!

The Marvel Universe has mysteriously changed in such an alarming way that Doctor Strange has done what he's avoided for decades; he's opened a school for young sorcerers. Young people from around the world with aptitude in magic have been brought together in New Orleans to study the Mystic Arts under Strange, Brother Voodoo, the Ancient One, the Scarlet Witch, Magik, Hellstrom and ALL your favorite Marvel magicians. But with all the new magical threats, is it too late?!

As Gotham City continues its rise from the ashes of "City of Bane," some familiar faces have returned to keep Gotham City exactly where they want it: Two-Face is back. But this time, he's recruited some like-minded individuals to help him in his cause. With an elite team of split-personality special forces at his side, Two-Face and Batman square off in what could be their final battle, as a new ally arrives to help the Dark Knight...Harvey Dent?!

The Resurrection Protocols have changed everything for Mutantkind. NO MORE can humans' hate and fear take their lives from them. But... what ELSE has it changed?

The Daywalker returns to his never-ending hunt for vampires! Explore Blade's mysterious past - and sink your teeth into his present - in stories featuring Spider-Man, Dracula, Doctor Doom and...Santa Claus?! As civil war rocks the Marvel Universe, Blade's blades clash with Wolverine's claws - but why does Logan seem so familiar? Then, because you demanded it: Hannibal King returns, and fangs are sure to fly in a mismatched, buddy-cop-style team-up! Blade heads to England seeking answers - but when all he finds is trouble, somebody's gonna pay! Guest-starring Union Jack! Plus: Not a hoax! Not an imaginary story! The death of Blade! And when Logan returns for a special rematch years in the making, there will be blood! Collecting BLADE (2006) #1-12 and WOLVERINE VS. BLADE SPECIAL #1.

Be the first to know and let us send you an email when The Comics Pull List posts news and promotions. Your email address will not be used for any other purpose, and you can unsubscribe at any time.