Films are made available for educational and home DVD, online and cable VOD, public exhibitions, festival screenings, television broadcast, and all other non-theatrical channels. dGenerateFilms.com is a valued resource for up-to-date information and news on the independent Chinese film movement. We also facilitate co-production relationships between filmmakers in China with their counterparts internationally.

Conceived in 2017 and filmed over 5 years, Chan Tze Woon's BLUE ISLAND confronts the large-scale 2019 protests in #HongKong. A new wave of young people took back the streets, as one generation after another has done throughout Hong Kong’s history.

"Inventive! Suggests that the past is never finished, and neither is Hong Kong" — Artforum

An Icarus Films Release. From the dGenerate Films Collection. 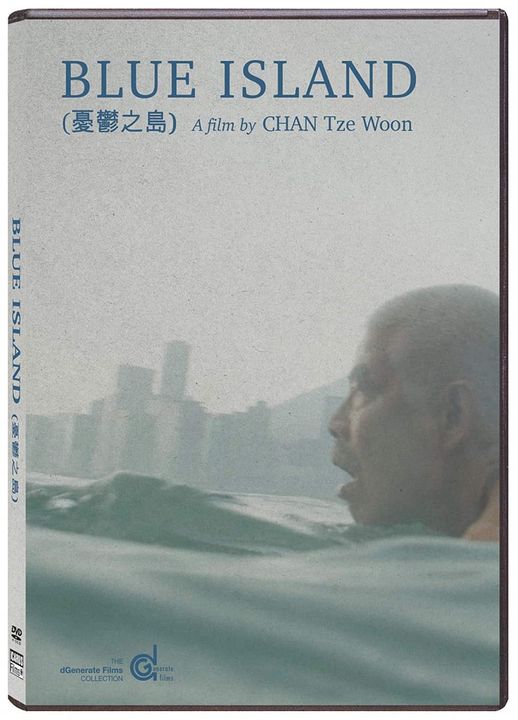 An Icarus Films release. From the dGenerate Films collection.

OVID’s November Releases: The seductive and strange arthouse hits "Ham on Rye" and "Preparations to be Together for an Unknown Period of Time," season 2 of "Maison Close," Michel Gondry's dysfunctional family doc "The Thorn in the Heart," the...

At long last! Here is OVID's complete November schedule of new films coming to the service. Check it out! / Did you see that last month they released our film KARAMAY? Here: https://www.ovid.tv/videos/karamay < It is VERY Long, but with OVID's Free 7-day trial period you might be able to get through it!

OVID.tv, the curated streaming destination for documentary and art-house films from around the world, announces its wide-ranging selection of films coming in November 2022.

Directed by CHAN Tze Woon • Documentary • 2022 • 98 minutes BLUE ISLAND documents three people who engaged in rebellions when they were young. Through reconstructing these events, the film dramatizes their scarred memories and experiences by using four young people who participated in the 2019...

"A sweeping history of dissent in Hong Kong over the course of decades, anchored in poignant personal stories." - Redefine Magazine

Directed by CHAN Tze Woon • Documentary • 2022 • 98 minutes BLUE ISLAND documents three people who engaged in rebellions when they were young. Through reconstructing these events, the film dramatizes their scarred memories and experiences by using four young people who participated in the 2019... New DVD from Icarus Films and dGenerate Films releasing 10/25: BLUE ISLAND — a courageous look at the fight for a free Hong Kong! "Inventive! Suggests that the past is never finished, and neither is Hong Kong." — Artforum

This 5+ hour long journalistic epic tells the story of a tragic fire in the town of Karamay which killed 300 children due to neglect. While censored by Chinese state media at the time, filmmaker XU Xin helps the community break their silence and mourn their children two decades later.

"A landmark in journalistic diligence and a dedicated act of commemoration and healing" (Michael Fox, SF Weekly)

Not yet subscribed to OVID? Now is the perfect time! Use offer code SEPT for 50% off a 1-year subscription! Offer valid only until September 30th! | https://bit.ly/3DuOerI

Directed by XU Xin • Documentary • 2012 • 356 minutes In 1994, the oil-rich city of Karamay in Northwest China was the site of a horrible fire that killed nearly 300 schoolchildren. The students were performing for state officials and were told to stand by while the officials exited first. Aft...

"An exploration of traditional Chinese opera forms as much as it is an exercise in Brechtian alienation" (Dan Scanlon, Screen Slate), A NEW OLD PLAY returns to New York City for its second Back By Popular Demand run. Screening at Anthology Film Archives starting today and going through September 5th.

True to its title, Qiu Jiongjiong’s A New Old Play (2021) operates as a series of contrasts. For his narrative feature debut, the artist and documentarian has crafted a film that simultaneously serves as a detailed account of China’s turbulent political history throughout the 20th century, and a...

OVID’s September Releases: Our biggest slate ever, with Costa-Gavras, a landmark documentary about trans lives, Ingmar Bergman and Peter Greenaway, art and architecture, the birth of Mumblecore & so much more! - metafilm | OVID.tv

Find out which dGenerate Films title is making its OVID Exclusive Streaming Premiere this September! ⬇️⬇️⬇️

OVID.tv, the curated streaming destination for documentary and art-house films from around the world, announces its wide-ranging selection of films coming in September 2022.

BACK BY POPULAR DEMAND - AGAIN!

Qiu Jiongjiong's A NEW OLD PLAY returns to Anthology Film Archives this weekend, for what might be New York City's last chance to see the epic masterpiece on the big screen. 9/1 - 9/5.

🌟 "A sweeping history of dissent in Hong Kong over the course of decades, anchored in poignant personal stories." —Redefine Magazine

🌟 "Inventive! Suggests that the past is never finished, and neither is Hong Kong." —Artforum

🌟 "It is impossible to watch BLUE ISLAND without admiring their courage." —The New York Times

"Inventive! Suggests that the past is never finished, and neither is Hong Kong," writes Xueli Wang for Artforum. Read the full piece >> artforum.com/film/chan-tze-woon-s-past-and-future-hong-kong-88847

The question of what it means to be a Hong Konger is examined in Chan Tze-woo’s innovative and affecting hybrid documentary “Blue Island.” Artfully editing footage of the 2019-2020 protests with dr… BLUE ISLAND, this year’s extraordinary HotDocs winner, opens theatrically at Metrograph on July 29th. It will also be available online on Metrograph At Home from August 5th-18th. 🟦 Tickets available now at metrograph.com/blue-island @icarusfilms_

Tickets on sale now: BLUE ISLAND opens at Metrograph for an exclusive run on July 29th, with a live virtual intro and Q&A on opening night! 🎟️ bit.ly/3O99kOe

How do the young people of #HongKong envision their future today? What do they think about this seemingly unwinnable revolution? Join us at Roxie Theater on Saturday, August 6 for a screening of “Blue Island.” This new Icarus Films release bravely portrays Hong Kong’s political past and present in a "a desperate attempt to capture the final moments of a sinking island," as director Chan Tze Woon himself puts it. The screening will be followed by a virtual Q&A with director Chan Tze-Woon and producer Peter Yam. Limited tickets available! https://bit.ly/3z6c2jc

"Yang creates a detail-rich, quietly moving portrait of a doomed youth left behind in a Chinese village," writes film scholar Karen Ma of filmmaker Yang Jin's ER D**G. Ma continues, that by "focus[ing] his camera squarely on rural life, [Yang] offers a new and updated take on this important corner of China."

The director of new release BLUE ISLAND spoke with Redefine Magazine about his genre-bending new film: "You keep asking the question, ‘Is it a documentary or is it real?"

The film opens in Seattle this Wednesday, screening from July 13th to 21st at Northwest Film Forum 🎟️ nwfilmforum.org/films/blue-island-in-person-only/

BACK BY POPULAR DEMAND: A NEW OLD PLAY in NYC!

Qiu Jiongjiong's A NEW OLD PLAY returns to #NewYorkCity this weekend, with a limited BACK BY POPULAR DEMAND run at Anthology Film Archives, July 1st through 3rd! Get your tickets! 🎟️ bit.ly/3O6V5Ks

Qiu Jiongjiong's epic masterpiece A NEW OLD PLAY is making its way to theatres near you! Screenings TODAY in Los Angeles & Austin, and upcoming dates in New York City & Dallas!

From the dGenerate Films Collection. An Icarus Films Release.

Two weeks until the absolutely unique A NEW OLD PLAY that feels like one long lucid dream hits AAAFF! It's a a view of Chinese history told through theater in a film with unparalleled art direction.

Experience A NEW OLD PLAY at Austin Film Society 6/24 8:05pm!
If you purchase tickets to A NEW OLD PLAY, you also get a $2 discount to HIDDEN LETTERS! Tickets: https://bit.ly/3zAPo3f

A NEW OLD PLAY opens in Los Angeles this Friday at Laemmle Glendale! Do you have your tickets yet? 🎟️ laemmle.com/film/new-old-play

In “A New Old Play,” the Chinese director Qiu Jiongjiong daringly and imaginatively dramatizes twentieth-century Chinese political history—despite ongoing censorship in China—through the epoch-spanning story of a small theatre company. The movie, which opens on May 20 at Anthology Film Archi...

TAKING BACK THE LEGISLATURE and INSIDE THE RED BRICK WALL are featured in the latest edition of Film Quarterly, in print and online!

Watch We the Workers Online | Vimeo On Demand

In Wen Hai's 2017 vérité doc WE THE WORKERS, organizing workers in southeastern China find themselves up against factory employees who don't understand their rights and fear heavy consequences, government officials who see them as dangerous troublemakers, and foreign owners who ignore what lax regulations do exist.

"We the Workers" China’s economic miracle has been built on cheap labor. And now, that labor is starting to fight back. Filmed in the southeastern…

Keep an eye on the Icarus Films "In Theaters" listings to see when BLUE ISLAND is coming to a theater near you: icarusfilms.com/other/playdate

‘A New Old Play’ Review: Even the Clown Show Must Go On

"Per the title, Qiu Jiongjiong’s magnificently layered historical epic, “A New Old Play,” draws as much from Brecht and Beckett as from cinematic traditions. At once tragedy and farce, it breathes new life into a story as old as civilization." —Austin Considine, The New York Times

U.S. premiere theatrical engagement opens tomorrow, Friday, May 20 at Anthology Film Archives and coming soon to a theater near you!

Qiu Jiongjiong’s absurdist epic of 20th century China is both a movie and a play, both tragedy and farce.

A masterpiece of cinema, theatre, and storytelling, Qiu Jiongjiong's A NEW OLD PLAY opens for its U.S. theatrical premiere run THIS FRIDAY, May 20th at NYC's Anthology Film Archives, before arriving at select theaters nationwide this year!

Before Qiu’s award-winning feature opens in theaters, the National Museum of Asian Art will present an online retrospective.

Check out what's new today on OVID.tv from our friends over at Kino Lorber! ⬇️⬇️⬇️

Directed by Bi Gan • Drama • With Wei Tang, Jue Huang, Sylvia Chang • 2019 • 140 minutes Bi Gan follows up his knockout debut, Kaili Blues, with this noir-tinged stunner about a lost soul (Jue Huang) on a quest to find a missing woman from his past (Wei Tang, Lust, Caution). Following leads ...

Be the first to know and let us send you an email when dGenerate Films posts news and promotions. Your email address will not be used for any other purpose, and you can unsubscribe at any time.

Send a message to dGenerate Films:

BACK BY POPULAR DEMAND: A NEW OLD PLAY in NYC!

Qiu Jiongjiong's A NEW OLD PLAY returns to #NewYorkCity this weekend, with a limited BACK BY POPULAR DEMAND run at Anthology Film Archives, July 1st through 3rd! Get your tickets! 🎟️ bit.ly/3O6V5Ks

This weekend’s @thenyff screenings of @junewdoc’s ALL ABOUT MY SISTERS may be💔 SOLD OUT 💔but standby tickets will be available! Patience is a virtue and Wang’s incredible debut is not to be missed! More info at: https://www.filmlinc.org/nyff2021/films/all-about-my-sisters/

Plz contact #MarqueEntertainment for film and Ad films for line production in pan India. Marque Entertainment is a media company located in Mumbai, India an Event organizers, Celebrity Management, Corporate Events, Live Events, Film Production, Financing, Film Acquisitions, Distributions and We are also do Line Production for International projects. 1. We do all the permissions and clearances from the Indian government. 2. We assist in the visa application 3. We do location scouting as per the script demand. 4. We will organize casting and post auditions online. 5. We will hire the best possible crew for your project and negotiate the most economical rates, liaising with unions where required. 6. Our legal team will consult on India taxation laws and other legal requirements, including contracts with crew members. 7. We analyze and break down your script, work out a budget and a schedule for you. 8. We will book all the required equipment for you from the high quality suppliers we have sourced in India. 9. We coordinate all hotels and travel plans related to your shoot. You will receive our special discounted rates. 10. We can help in the clearing of all shipments to India as well as the subsequent export out of the country. Marque Entertainment Manish K Singh - +91 9323537040 / +91 9869408834 Lakshmi M Singh - +91 9820048777 [email protected] I
x

Other Film & Television Studios in New York (show all)