Combat Sports Specialist Rhett "PRITTY" Butler talks trash and gets in that ass! From MMA to Boxing and more, we take a position label you a hater, Ha!

Who did it best or

isn’t playing any games with 🤣

Stopped by with on to talk vs. and the Valdez’s past taco 🌮 meat situation *pause* where he tested positive for a banned substance he said came from 🇲🇽 food

Now that is “retiring” will get a shot?

Presented by Up On Game Presents

🥊SUBSCRIBE🥊RATE🥊REVIEW🥊
Everywhere you listen to your podcasts. Link in Bio

sits down with the HAMMER
on this NEW EPISODE

Presented by Up On Game Presents

Floyd Mayweather is returning to the exhibition boxing world. His next opponent has been recently announced as "Dangerous" Don Moore.

The event billed as "The Global Titans Fight Series," sees Mayweather taking his talents to a helipad at the top of the Burj Al Arab Hotel in Dubai on May 14.

When he was active, Mayweather usually fought twice a year, in May and September, during the last few years of his legendary career.

Still, the fight comes when Mayweather's protegè, Gervonta "Tank" Davis, is at the end of his contract with Mayweather Promotions and his last fight is against stablemate Roland "Rolly" Romero.

how much of this is a realization that his stable without Tank isn't as strong without him helping to fuel the promotional company is still unclear.

Stop saying boxing doesn’t make the best fights. That’s over. Who’s ready for an undisputed champion at lightweight between and on June 5th?

Stop saying boxing doesn’t make the best fights. That’s over now. Who’s ready for the super featherweight match up between and on April 30th?

says he’s back in August and one can only presume he means boxing and not MMA. He still has a deal with so now the only question is, who’s his opponent 🤔 🥊 who do you think The Problem Child should face next? 👇🏾👇🏽👇🏼 # jakepaul

putting that work in for the all showdown against stablemate calling it a “shootout.” Who wins this battle taking place 3/28/22 at ? 👇🏾👇🏽👇🏼

After the devastating leg break against Dustin Poirier, who almost finished his career, Conor McGregor feels better. The former champ-champ recently revealed that he wants to attempt to get another belt but this time in the welterweight class.

“I believe myself vs. Usman for the 170-pound title for my comeback fight is the one I’m eyeballing at the minute.” 👀

Watch the latest episode of PRITTY Left Hook with our guys and Señor Miguel. aka 🥋🥊

Streaming Everywhere! Part of the courtesy of

podcast is now on catch everywhere podcasts are heard

is on another level, respectfully. to on 2/20 and will possibly take on who is a regional sensation. Reminds you of his exhibition in Japan against .nasukawa easy work 🥊💯 podcast is now apart of and streaming everywhere ‼️

talmbout bouncing out the lightweight division and going str8 to the junior welterweight division 👀 thoughts?? ‼️ 👇🏽👇🏼👇🏾 podcast is now apart of the streaming everywhere

Rhett Butler talks about the controversial 6th round KO Luis Ortiz delivered to Charles Martin. Plus don’t hate on Yordenis Ugas vs. Errol Spence and Jake Paul starts off 2022 right coming for everybody! Streaming now everywhere! 🥋🥊

Apparently got the memo that wants to fight him and he’s floating the idea around too. In fact, he has an idea on gloves that is unconventional too! Swipe ➡️ to see Fury’s proposition 👀🥋🥊 podcast is now on streaming everywhere! Link in Bio

Things you see while in . Floyd Mayweather (retired 50-0) and Joe Calzaghe (retired 46-0) bumping into one another in 🇦🇪 🥊

Apparently, Tony Bellew has a problem with this 👀 ‼️ podcast is now part of

“I’ll Beat The Sh*t Outta Jake Paul; he’s going to have to take me to court” 🤭 Rhett sits down with Claressa Shields to talk Ema Kozin, Katie Taylor and of course

We OUTSIDE ‼️ Hitting you with that new new courtesy of and Tap In! 📲 🥊🥋💯

PRITTY Left Hook is now a part of 🥊🥋 new podcast episodes every Wednesday! Link in Bio! Salute to ‼️

Guess who’s back! We outside! With and coming to you Wednesdays at 3pm on podcast platforms and YouTube. 🥊🥋

A.J. McKee: The Precipice of Greatness | The Shadow League

All eyes on the Young GOAT A.J. McKee 🥋

More Sports A.J. McKee: The Precipice of Greatness By Rhett Butler - July 1, 2021 Facebook Twitter Pinterest WhatsApp A.J. McKee is an anomaly. The 26-year-old son of Antonio McKee began his professional career only six years ago in the Bellator MMA cage. It is rare for a fighter to have his debut f...

Boxing Gervonta Davis Looking To Slowly Become One Of The Best In His Generation By Rhett Butler - June 23, 2021 Facebook Twitter Pinterest WhatsApp Esther Lin/SHOWTIME Gervonta Davis is on a quiet mission. While his peers in boxing use their platforms to become more famous for social media prowess....

Boxing Yo Philly! King Gabe Rosado Made Sports Great Again By Rhett Butler - June 21, 2021 Facebook Twitter Pinterest WhatsApp The city streets of illadelphia lacked the sensational brotherly love they are most famed for. Before Trae Young and the Atlanta Hawks extinguished the playoffs dreams of th...

Boxing Deontay Wilder Stays Silent And Gives Longest Face-Off By Rhett Butler - June 16, 2021 Facebook Twitter Pinterest WhatsApp Deontay Wilder is not in the mood for the shenanigans. At yesterday’s pre-fight press conference, Wilder set a tone reflective of his mood as of late, rebirth. INTENSE ...

Leonard Ellerbe Goes Off On Triller | The Shadow League

Respect The GWOAT | The Shadow League

Boxing Respect The GWOAT By Rhett Butler - June 12, 2021 Facebook Twitter Pinterest WhatsApp Claressa Shields tried to tell you. “T-Rex” made her professional MMA debut on Thursday in Atlantic City, NJ, for the Professional Fighters League in impressive fashion. Check out the speed of ...

Be the first to know and let us send you an email when Pritty Left Hook posts news and promotions. Your email address will not be used for any other purpose, and you can unsubscribe at any time. 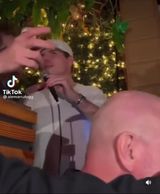 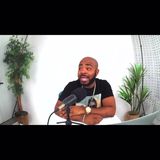 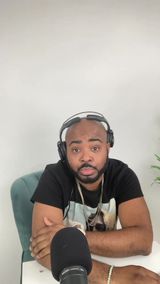 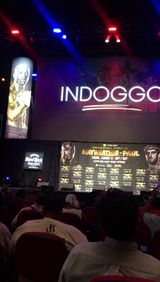 The weigh-ins for Floyd Mayweather vs. Logan Paul 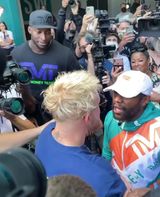 Where The Money Reside, Conor?

How does “Mighty Mouse” match up against Adriano “Minkinho” Moraes? 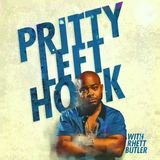 LEADER OF THE NEW SCHOOL! 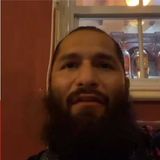 Jorge Masvidal our the UFC in notice that he wants his paper. However, Dana White is staying steadfast on whatever numbers discussed. Looks like there’s another revolution happening. 👀 #UFC #Gamebred #PRITTY (📹 @espnmma) 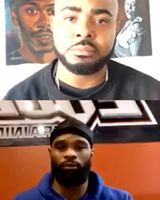 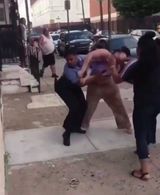 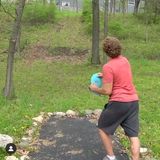 Is this frisbee throw by Ben Askren official or soft like tissue? 😂🥋🥊💯 #BenAskren #PRITTY 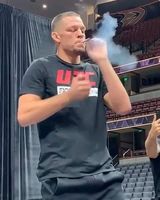 @realdevinhaney is out here showing y’all he’s ready. What do you think about the young bawse? #thedream

Who did it best? @jonnybones #bottlecapchallenge

@joeboxerparker made a successful @dazn_usa debut tonight. Having lost to @anthony_joshua and @dillianwhyte and defeated @andy_destroyer13, Parker now wasn’t to run it 🔙. The question remains does a rematch with AJ, Dillian Whyte, or Andy Ruiz Jr. happen Waugh different results 🗣Thoughts?? #heavyweightboxing

Welcome to the PRITTY Left Hook podcast where we get real about combat sports! I promise you that I will take a position that will either have you fist-pumping your coworker in the next cubicle or cursing me out voraciously. I talk trash and get in that ass, baby.

Thanks to our new partnership with former NFL Legend, LaVar Arrington, we’re bringing the heat this week with a new podcast episode!

Don’t let the snow keep you in all week! Come out for wings and a chance to snap a photo with NFL Legend at Buffalo Wild Wings - Hull Street this Tuesday, January 18th at 4:00pm!

Don't forget to tag us in all your photos! Pritty Left Hook, FOX Sports, FOX Sports Radio, Onmyfeet on Facebook, and , , , on Instagram.

Visit https://pom.paceomatic.com/upongamepodcast for more Meet and Greet opportunities and how you can listen to the first episode!
If you love skill games and want to meet NFL legend LaVar Arrington, then you must be at Buffalo Wild Wings this Tuesday, January 18th, 2022 in Richmond, Virginia!

Join us at our first Meet and Greet starting at 1:30 pm!

Grab some wings and a photo with Lavar and all your friends and family!

Don't forget to tag us in all your photos! Pritty Left Hook, FOX Sports, FOX Sports Radio, Onmyfeet on Facebook, and , , , on Instagram.

Visit https://pom.paceomatic.com/upongamepodcast for dates and times!
The one and only Rhett Butler is 🔴LIVE on SportsCastr from the Florida Boxing Hall of Fame. You can't believe the guests who are sitting down with Rhett! Get in here to chat with Rhett and his guests!

If it's boxing, that means Rhett Butler is in the house, repping Pritty Left Hook and the The Shadow League 🔴LIVE on SportsCastr!

https://sc.ws/21hia/238
Your boy, Rhett Butler, is 🔴LIVE on SportsCastr RIGHT NOW with Darrion "The Wolf" Caldwell! Tune in NOW and chat live with Rhett and Darrion as The Wolf prepares for a huge matchup Friday night at Bellator 222. Follow The Shadow League on SportsCastr and never miss a moment with Pritty Left Hook and all the huge MMA and boxing stars who enter the studio with Rhett!
Monday at noon the phenomenal Heather "The Heat" Hardy will be with the best interviewing in combat sports, Rhett Butler , 🔴LIVE on SportsCastr!

SportsCastr.com/TheShadowLeague
In case you missed it: Listen to the exclusive interview with Elhadji Gaye Ndour aka “Black Magic” on the Pritty Left Hook podcast!