Jewish Exponent: What It Means To Be Jewish In Philadelphia Since 1887, the Jewish Exponent has informed, connected and engaged Greater Philadelphia's vibrant Jewish community through our weekly newspaper, special sections and website.

We are the go-to resource for local, national and international Jewish news, op-eds, blogs, calendar listings, mazel tov announcements and exclusive features. The Exponent truly is what it means to be Jewish in Philadelphia. We may use Facebook comments in our print issue's Kvetch 'N Kvell letters to the editor section.

In naming their babies, modern Jews are opting for names that are either classic or contemporary.

A May 2021 Pew Research Center study revealed that younger Jews in the United States were more likely than older generations to migrate to the religion’s extremes; compared to their […]

B'nai Mitzvah tunes have changed. Minute-long TikToks and Instagram Reels have captured the catchiest minute of a song, and that’s the minute kids want to hear.

When Justin Kodroff had his bar mitzvah party in 2006, Lil Jon’s “Snap Yo Fingers” and Yung Joc’s “It’s Goin’ Down” were as big of hits on the dance floor […]

Big Jewish Weddings Are Back in 2022 - Jewish Exponent

The New York Times reported in February a prediction from the trade group Wedding Report that about 2.5 million weddings would “take place” this year, a “bump not seen since […]

Rabbi Peter Rigler: "This portion grapples not only with the disease known as tzaraat, often mistranslated as leprosy, but also with the societal behaviors in response."

They used to come into my office when I handed the b’nai mitzvah students the Torah portion of Tazriah, and I could see disappointment.

You Should Know...Zo Baker - Jewish Exponent

Now a 2022 Tribe12 fellow, Zo Baker, who grew up in Queens, New York, hopes to rectify the lack of Jewish-specific spaces in the art world by creating an artist-in-residency program.

Instead of finding a community at graduate school, Zo Baker, 29, found the experience to be rather isolating. While pursuing a master of fine arts at the University of Pennsylvania, […]

33 years ago, Viktoriya Torchinsky-Field left Soviet-era Ukraine for the United States. Now she's going back, in spirit, to her native country to help those impacted by the war.

Congregation Beth Israel, a Reconstructionist synagogue in Media, has focused on social justice in its community activity for years.

But in 2020 after the murder of George Floyd in Minneapolis, the temple clarified its mission to emphasize anti-racism.

Congregation Beth Israel, a Reconstructionist synagogue in Media, has focused on social justice in its community activity for years. But in 2020 after the murder of George Floyd in Minneapolis, […]

Joel Burcat was a lawyer for 38 years. Now he writes environmental legal thrillers.

Joel Burcat claims he didn’t base his protagonist Mike Jacobs on himself, but the similarities are undoubtedly there. Both are environmental lawyers, Jewish and attended the Pennsylvania State University and […]

Jewish Federation CEO Michael Balaban and board co-chair Gail Norry visited Poland to distribute diapers, toothpaste and other items to refugees from the War in Ukraine.

In the six duffle bags stuffed with the essentials — diapers, toothbrushes, toothpaste and clothing — one would not expect to find several new Barbie dolls. But to Jewish Federation […]

Beginning on April 1, it will take on perhaps the most difficult conversation in Jewish life: the Israel-Palestine conflict.

Philadelphia’s InterAct Theatre Co. produces plays that “provoke conversation” about sensitive topics, according to a recent press release. Beginning on April 1, it will take on perhaps the most difficult […]

While COVID has changed many health behaviors, making some more fearful of going to the grocery store or getting vaccinated, health professionals have noticed it’s opened the minds of young people and prospective parents getting screened for Tay-Sachs, BRCA genes — which increase risk of breast and ovarian cancers — and hundreds of other diseases of which Ashkenazi Jews are at increased risk.

Over the past two years, University of Pennsylvania students have grown accustomed to spitting in tubes. Many line up weekly or twice-weekly for their routine COVID tests, swirling and spitting […]

In our modern capitalist society, Jewish farmers can’t really observe the shmita year. But they can at least follow the spirit of the tradition, they say.

In our modern capitalist society, Jewish farmers can’t really observe the shmita year — the once every seven years tradition of letting the land lie fallow so farmers can rest […]

Lyn Julius: "Amnesty’s blinkered anti-Zionism is a recipe for disaster."

“The right of people to self-determination is something I believe in … but we are opposed to the idea that Israel should be preserved as a state for the Jewish people.”

Idit Klein and Is Perlman: "We are alarmed by the surge of legislative attacks on the rights, safety and dignity of LGBTQ youth across the nation."

We are alarmed by the surge of legislative attacks on the rights, safety and dignity of LGBTQ youth across the nation.

This Is Real War - Jewish Exponent

Gershon Bloritzky: "For most people, when the images of Russian tanks approaching Ukraine’s border began to be broadcast around the world, it was something looked upon as news from a distant front — horrific, but very far away.

But for me, who lives in Ukraine, this was life, and it was all too real."

When the images of Russian tanks approaching Ukraine’s border began to be broadcast around the world, it was something looked upon as news from a distant front.

Yehuda Kurtzer: "After decades of fearing that we would forget the horrors of our recent past, I am starting to fear the opposite possibility: that we Jews remember our history all too well but feel powerless to act on its lessons."

We Jews remember our history all too well but feel powerless to act on its lessons.

Antisemitism in the Curriculum - Jewish Exponent

Mid-Atlantic Media Editorial: "While we see the merit of educating primary and secondary school students on ethnic studies and minority community issues, we are troubled by the unrelenting efforts of those who seek to manipulate the process to promote antisemitic content, delegitimize Israel and challenge the right of Jews to self-determination."

Over the past several years concerns have been raised over antisemitic and anti-Zionist content being baked into school curricula.

Mid-Atlantic Media Editorial: "Sierra Club now confirms that it is committed to the enjoyment, exploration and protection of the planet and that it doesn’t take positions on foreign policy matters. We hope that’s true."

Last week, a skirmish in the battle to promote Palestinian rights by delegitimizing the state of Israel broke out at the Sierra Club.

Keri White: "This meal is tasty, healthy and offers some variety from the usual, though delicious, Passover fare."

This meal is tasty, healthy and offers some variety from the usual, though delicious, Passover fare.

Keri White: "This meal is great year-round, but it works well for Passover, whether served for seder or just during the week as a chametz-free dinner."

This meal is great year-round, but it works well for Passover.

Linda Morel: "Why is the second night of Passover different at my house from all other nights? Because we are trying Jewish food we never had before and opening our tastebuds to a real treat."

Whenever I’ve hosted seders on the second night of Passover, I’ve worried that I should offer something different.

Singapore: Where Culture, Cuisine and Charm All Meet - Jewish Exponent

Jill and Jordan Perlin: "Located approximately 85 miles from the equator is one of the most vibrant, diverse and exciting places — Singapore. It is a city, state and country all in one."

Located approximately 85 miles from the equator is one of the most vibrant, diverse and exciting places — Singapore.

Rabbi David Levin: "My heart goes out to the millions of people whose world is shattered beyond recognition. What can I do besides sit in grief?"

There is nothing more horrific than losing a child.

You Should Know...Henry Morgan - Jewish Exponent

On March 15, chef Henry Morgan cut the ribbon on his first cafe, Homeroom, which is located at the former Green Bean Coffee in Gladwyne.

Chef Henry Morgan is right back where he started, and he couldn’t be happier about it. On March 15, the CookNSolo alumnus cut the ribbon on his first cafe, Homeroom, […]

Stuart “Stu” Goldman, the former editorial cartoonist and art director/graphics editor for the Jewish Exponent, died on March 3 at his home in Fort Lauderdale, Florida. He was 74.

Stuart “Stu” Goldman, the former editorial cartoonist and art director/graphics editor for the Jewish Exponent, died on March 3 at his home in Fort Lauderdale, Florida. He was 74. Goldman […]

When Jerome P. David was 11 or 12 years old, he convinced his parents to join a synagogue. He doesn’t remember the exact reason why; he just remembers feeling strongly […]

As other Jewish communities try to figure out their hybrid futures, Temple Sinai in Dresher lives and gathers in a hybrid present.

After the pandemic broke out in March 2020, Temple Sinai in Dresher made like most congregations and pivoted to the digital space. Two years later, the Conservative synagogue is still […]

During his brief time in Eastern Europe, Gary Wasserson, with the help of his daughter’s partner Kevin Rowell, a disaster relief specialist, organized a network of volunteers and nonprofit leaders to build “structured grassroots efforts” to help extract hundreds of Ukrainians, both Jews and non-Jews.

Three weeks ago, Gary Wasserson wasn’t aware he had relatives in Ukraine, let alone that he’d be there when they fled the country to Poland. “It seems like a year […]

Temple Emanuel and Congregation M'kor Shalom, both in Cherry Hill, are unifying into one synagogue. And they have a lot of work to get done before their July 1 unification date.

Temple Emanuel and Congregation M’kor Shalom members took separate votes on Jan. 24 on whether to unify their Reform synagogues, both based in Cherry Hill, New Jersey. All congregants on […]

In pandemic-era Philadelphia, gun violence is a catastrophic and ongoing problem. But is it impacting Jews?

In pandemic-era Philadelphia, gun violence is a catastrophic and ongoing problem. Two years ago, the city suffered through 499 homicides, outpacing the number from any 12-month period in the 2010s. […]

Over the past century, Golden Slipper has served the Greater Philadelphia community through programming for older adults at two campuses and a summer camp serving 500 kids and providing scholarships and financial aid to those who need it.

Christopher Lawrence doesn’t remember the first Golden Slipper Gems event he attended four years ago, but he does remember the company he kept. “There’s a very coherent group of folks […]

Be the first to know and let us send you an email when Jewish Exponent posts news and promotions. Your email address will not be used for any other purpose, and you can unsubscribe at any time.

Send a message to Jewish Exponent:

From Bombay to Philadelphia: Keri White shares a simple recipe to spice up vegetables in this installment of Five Minute Dish.

#Seinfeld premiered on this day 28 years ago! Do you have a favorite episode or quote? Share in the comments! #andyadayadayada 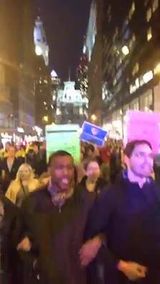 The Muslim and Jewish solidarity rally marched from City Hall to Independence Mall. 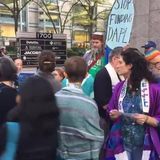 Members of the Jewish community came together in solidarity for the Dakota Access Pipeline against large banks. They are currently protesting outside Wells Fargo on 17th and Market streets. #DAPL 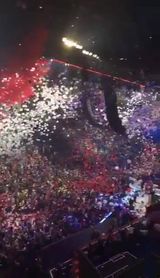 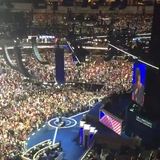 The roll call vote came to an end at the DNC. Bernie Sanders moved to name Hillary Clinton the Democratic nominee for president. #DNCinPHL

Other Newspapers in Philadelphia