Real, raw, and based out of Philly, we showcase the underrated and overlooked amazing talent of skateboarding's bastard children of the entire East Coast.

Focus is a freely distributed East Coast skateboarding magazine. Read it, love it! Run to your local skate shop, pick one up for free, and let the good times roll.

4 Bed, 2.5 Bath is renovated and ready for its new owner. Contact me today to make an appointment!

I'm going to give these to anyone that tries to kick us out of a spot!

My girlfriend and I have been considering a move from North Carolina to Delaware and have been looking for potential properties with Mike's assistance. He has been incredibly helpful so far, and very accommodating with our long distance search. He is very in tune with what we are looking for, and has even done a couple walk throughs with us via facetime! He has truly gone above and beyond what we have expected, and we are looking forward to closing a deal with him once we find our perfect property. I highly recommend him!

Show some love for this bad-ass slim wallet (as thin as a bearing) from Mstrmnd Collective! Happy pockets = Happy skating. Grab it here - http://www.mstrmndcollective.com
#SkateLife #ThankYouSkateboarding

Lotta fun shooting this one

We just posted our 10-Year Anniversary issue live on our site! It's also available at your local shop!!! This historic issue has 2 different versions of the cover and comes with an epic FREE poster!!! Grab one while you can. This FINAL issue won't last long!
http://www.focusskatemag.com/2015/05/mayjune-2015/

Have you registered for the Maryland Am yet?

Even Mansolillo skates a handful of Florida parks in this week’s Montage Mondays.

Nick Rudzinski gives us a little taste of what to expect in Gem, via our Photo of the Week.

Starting the week off with some Nick Zizzo? We’ll take it. Westgate's got a different plank under his feet.

Marcus Eagel knows how to drop a part. Check out his footage from “Duzzed!"

What are you doing April 11th? How does going to Rye Airfield Skatepark sound? Mark your calendars - 2 contests in 1 day!

Vini Holanda and Ricky Aponte share the spotlight in this week's Photo of the Week.

A little throwback Dave Bachinsky joint to start your week off right.

Some ATL for you guys.

Justin Koziol throws it down!

Tampa Pro is a wrap! Thanks for housing another rad weekend, Skatepark of Tampa. Here’s a brief recap!

The Tampa Pro webcast is about to start over at streetleague.com! 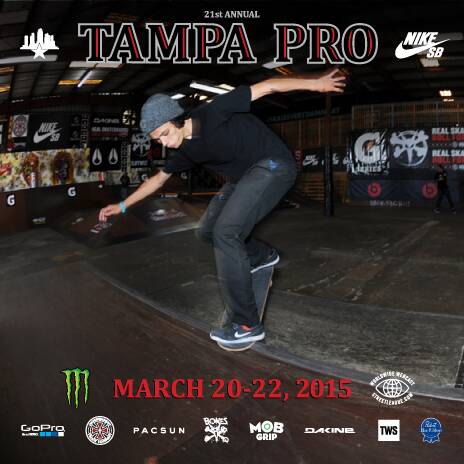 Who is heading out to Skatepark of Tampa this weekend for Tampa Pro?

Ryan Herron’s part from Brolife 2 is now playing in this week’s Montage Mondays!

Need some hype in your day? Peep the new promo from Corner Store out of Boston. Beantown skate scene has been putting in some work lately!

Jacked rails, clean tricks. This week's Photo of the Week is live!

Tim Savage's full length is going to be, well, savage!

Village Psychic remixed some footage of Vermont native Chris Colbourn from his Cut & Dry, and Welcome To Element parts - Feast your eyes on greatness folks!

Some throwback Blake Carpenter footage for ya...

Colleges are notorious for having some of the best spots. But a contest series? Check out what Keegan Guizard is doing to further skateboarding in colleges all around the US.

Joel Morgenweck and Ryan Halbe make the most out of Winter in this week's Montage Mondays.

In-case you guys missed it, peep Dave Bachinsky's Salt & Pepper remix, or blow it and keep on scrolling for eternity. The choice is yours, choose wisely!

Bryan Schaefer helps us kick off the week on a good note with his part from Gulf Entities!

Murphy's Law is in full effect! Check out this new part from one of your favorites, Serge Murphy.

Be the first to know and let us send you an email when Focus Skate Mag posts news and promotions. Your email address will not be used for any other purpose, and you can unsubscribe at any time.

Davin Wynkoop sets up and lays it down in a quick clip from Survey Wheels. Click the link for the full video! http://www.focusskatemag.com/2015/01/davin-wynkoop-for-survey/

We apologize in advance for the mess that Kanaan Dern makes out of the handrails in his 3CHIP part. Filmed by Tommy Bohn. http://www.focusskatemag.com/2015/01/kanaan-dern-in-3chip/

Joey Wilson made it into one of our last Montage Mondays of 2014. Filmed by Michael Sassano. http://www.focusskatemag.com/2014/12/montage-mondays-156/

What? You mean you don’t break in a fresh set of wheels by doing 5050 flicks up hubbas? Must just be Max Catasus.. http://www.focusskatemag.com/2014/12/max-catasus-for-survey/

Moose shares what he thinks the best part of skateboarding is in this new clip from Filament Brand.

Dave Bachinsky and Pedro DeOliveira getting it done in Boston! Filmed by Tim Savage.

Peep some footage from Orchard Skateshop's trip to House of Vans! These boys good! http://www.focusskatemag.com/2014/05/orchard-at-hov/

We're down for any video from the East Coast, especially if it gives us a full part from Chris Mentlik. Get ready for the new Skatology video, Just Giv'r, dropping this summer! Thanks to Ian Smith for the clips!

Mark Suciu is a blessing to skateboarding. Check some clips of him in Boston, courtesy of Tim Savage. As seen in Elliott Vecchia's Natural Selection.

Well damn, Corey Goonan! Gap to Lipslide, as seen in the All I Need Skateboarding video, Thrive Prosper Rise.

These 15 seconds of footage from Zach Funk don't even begin to explain what went down in the Pittsburgh/DC section of Rise and Shine. Click the link below to see it all! http://www.focusskatemag.com/2014/04/rise-and-shine-pittsburgh-and-dc-2007/

Dane Vaughn and Pat Stiener have the last two clips in the Dirty South section of our first video, "Rise and Shine." Click the link to see the full part! http://www.focusskatemag.com/2014/03/rise-and-shine-dirty-south-2007/

There is a reason why Mat Call got our last cover. Video: Tony Davis

What the... Dave Bohack isn't playing around with this 11 flat 11 5050. Filmed by Matt Gener. Pulled from the #EastCoastExcellence hashtag on Instagram!

https://bit.ly/bikeclub21
http://bit.ly/Rustywknd4
I remember being super young, riding in my family's Aerostar, Glacier-colored Game Boy Advance with Tony Hawk's Pro Skater 2 in hand, looking out the windows while the next level loaded 🕹 Every time I'd pass the old bowling alley on Port Malabar I'd imagine people skating it. It was a dream spot! It was stairs that had a handrail running down the center of them, in our city, and it could be skated. I'd envision the pros from the games (the only skateboarders I knew) doing tricks down it, and I'd tell myself how I'm gonna go there one day when I'm older. A little over a decade later, I got "older" and I was there. Often. First by riding on my friend's pegs, then by car, pulling out work lights and skating it at night. I shot so many photos of so many people doing so many different tricks down these stairs for so many years and laid in so many unidentifiable stains and wet spots to get whatever shot(s) that the day called for. This photo was taken on April 24, 2014, and it was the last photo I shot there—coincidentally, it was also the wildest 🤯 For years, every time I'd come to this spot, whether it was with my regular friends or I was hopping in an out-of-town crew's car and playing tour guide for the day, somebody would mention how it would be cool to skate the rocky ledges extending out from it, knowing it would be pretty much impossible. The spot eventually got skated by a handful of pro skateboarders who would stop by while on Florida tours. Between them, and locals progressing by the day, the list of tricks that hadn't been done on it yet was dwindling quick. Knowing we wanted to shoot a trick down it that nobody had done before, Mat and I rolled out there one evening, stairs dirtier than they were most days, beer bottles shattered on the area where he had to land, and I had to lay, we did the trick that a lot of people joked about. We shot a photo on the rocky ledges. We were both blown away by what just happened and didn't tell anybody. ...until the next issue of Focus Skate Mag—the Philadelphia-based skateboarding magazine I worked for at the time—dropped, then we let the pages (and Instagram) do the talking. This is one of my favorite photos I've ever shot 🏆 And one of the last skateboarding photos I shot while I was among the years where I'd shoot nothing but skateboarding. Landscape photography broke that pattern. 🔵 FUN FACT: Just like I have favorite places to shoot the sky around Florida's Space Coast, I have favorite places to shoot skateboarding as well. Even though this building was torn down several years ago, it's never leaving the top of the list. A few of my friends have an ongoing joke about just how many photos I've taken there. It's essentially the Melbourne Causeway's skateboarding counterpart, in terms of a location to amount of photos taken there, ratio, for me. 🔵 stephenoliveira.com
http://bit.ly/goskate2019
Shredding Tears and Drinking Beers!
The Nick Swardson of skateboarding hit's the big quadruple duty day trip (with a little help from the homey's Adam Emery and The Mighty Meat Juice). From Man Ramon to Poo Town, over to Elk Grove then finally the Juice bowl.... A long day packed with sugar sticks and sick tricks all for the the man known as Rusty!
About That Ender:
Here's the 6th installment of the "Magalog Minute".... outtakes and bone breaks from our crew of rippers during these next few months of shooting and polluting for the next Clutch Catalog. Los Angeles with Ladjanski: AKA The Meridian Minute...... Skaters: Phil Ladjanski @thebigladjanski Rafi Dadd - @emerybored Jacob Tillman - @tillivision Filmed and edited by the 4 wheel Backscratcher - @4wbs https://vimeo.com/247897934
Our multi media machine rolls on producing the content the masses want for the Clutch Magalog..... Here's the 4th installment of the Magalog Minute.... Our young hero Rusty (AKA @master_shredder666 AKA Justin Hernandez) is caught shredding the sleepy little town of Moraga's little skate pit - dodging clueless scooter twits and not giving 2 sh$ts... https://vimeo.com/244736680