The pitcher tackled an opposing batter during his home run trot.

Disciplinary action has been taken following a strange incident during a college baseball game.

This decision was very unpopular at Comerica Park.

Patrick Peterson and Chase Edmonds weighed in on Kyler Murray's future with the Arizona Cardinals.

The case isn't over, though.

Suns star Devin Booker missed the majority of the second half of the team's Game 2 loss due to an injury.

Pat McAfee Targeted For Major Gig Amid 'Up To Something' Tease: Report | Sports Radio 93.3 KJR

McAfee has teased that he's 'up to something' on social media.

A strange incident took place during a college baseball game.

Mike Tyson lost his cool on his recent flight! 😱

Wright is a Naismith Basketball Hall of Famer and a two-time national champion.

Calls made by Dwayne Haskins' wife and a witness at the scene reveal more details about his death.

Tshiebwe is Kentucky's only consensus Naismith winner in program history.

Victor Rask, coming off a first star effort and win on Monday, is set to play in the 500th game of his NHL career when the Kraken battle the Colorado Avalanche. Philipp Grubauer gets a shot at his former teammates.

The fire was so large it could be seen from space.

Tyler Milam joins to share how he came up with the idea to dress up as the 1995 Mariners http://ihe.art/34dzWJv

The man who purchased the football used during what was believed to be Tom Brady's last touchdown pass revealed his identity.

The resemblance is uncanny.

The NBA has fined Kyrie Irving for incidents with Boston fans in Game 1 of the Nets' first-round playoff series.

Dr. Britt Baker got to meet her favorite team ahead of AEW's return to her hometown of Pittsburgh.

How Many Bathrooms Is Too Many w/ John Canzano (Audio) | Sports Radio 93.3 KJR | Puck and Jim brought to you by Redbox

Ronaldo and his longtime girlfriend announced the death of their baby son this week.

A clip showing the player being notified of his release went viral.

This is too fitting.

Nick Saban denied an Alabama player from having celebratory cake.

Wilson was arrested in Frisco, Texas and faces one charge.

The brother of the youngest victim killed in the 2013 bombing completed the 126th Boston Marathon.

The Kenyan professional long-distance runner set a new record in the world of track and field.

Ronaldo and his longtime girlfriend announced the death of their baby son.

Four of the NFL's best quarterbacks will participate in the 2-on-2 golf matchup.

The Ohio State University Athletic Band celebrated both Roth and Hagar eras of Van Halen this past weekend.

'Sorry if I messed that up with the whole unretiring thing guys.'

Be the first to know and let us send you an email when 93.3 KJR Seattle Sports posts news and promotions. Your email address will not be used for any other purpose, and you can unsubscribe at any time. 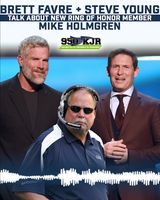 Ryan S Clark on A Blueprint for Kraken, NHL Draft Lottery, and a lot more!

Ryan S Clark of the Athletic on NHL Playoffs, Gretzky to TV, and more!

Ryan S Clark of the Athletic on the NHL Playoffs and Kraken! 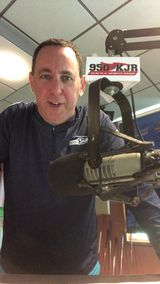 Greg Cosell on Aldon Smith with the Seahawks, the D-Line, and Draft

Gary Parrish wraps up the NCAA Tournament format, looks ahead to '21-'22, and breaks down transfers