Spark Public is digital storytelling showcase for millennials. Spark Public (formerly What’s Good 206) is a new public media site that showcases the next generation of multimedia content creators and journalists.

Our stories engage, entertain and remain fiercely local. Spark Public is a division of Cascade Public Media, a multi-platform media organization that includes KCTS9.org and Crosscut.com.

Our stories engage, entertain and remain fiercely local. Spark Public is a division of Cascade Public Media, a multi-platform media organization that includes KCTS9.org and Crosscut.com.

Depending on your personality, it can be tough opening up to new people once you’re in social situations. That's why the Grown-Up Club was started. More on why it's hard for adults to make friends at http://bit.ly/2uy3cqS.

Has Sexual Harassment Changed in the Last 20 Years?

"Not just a ‘woman’s problem’" Rewire

Sexual harassment is an insidious issue that continues to plague workplaces across industries. But this is not just a 'woman's problem'.

How has the Space Needle seen Seattle change since January 2015? Ricardo Martin Brualla stitched together a fascinating video documenting the change. 🏙 Here's a quick GIF of what was built...

Maybe it's time for a career change🤔

Four students at University of Washington in Seattle died by su***de in 2017. We don't have data from other local universities because most don't keep track.

A bill has been reintroduced this year in the Washington House that would change that.

Having a life crisis? Start with these:

I was an Amazon delivery driver: What it’s like to work in the tech giant’s citizen package brigade

I felt like Santa Claus earlier this month — the Amazon.com version, at least. I’ve spent the past few weekends trying my hand as a driver for Amazon Flex, the company’s Uber-esque platform that lets…

What the #MeToo moment demands of us

"...2018 offers us a chance to begin to dismantle this web of complicity." Via Crosscut

Amid the firings, suspensions and disavowals of so many powerful men who have lately been accused of sexual harassment and assault, Dictionary.com announced that the 2017 word of the year is “complicit.” Based on the news headlines, some might be … Continue reading →

Job hunting is THE WORST. So we bring you tips from an expert on how to stand out and land that job in 2018. Creative Circle

Get the inside scoop on how to succeed in an incredibly competitive job market and download example resumes.

Love to dance? DAYBREAKER will be back in Seattle to kick off the new year with Daybreaker SEA // SPACE JAM. #WakeUpandDance

Host Abby Shalawylo shows us her killer dance moves at a Daybreaker Seattle morning extravaganza! Waking up will never be the same. DAYBREAKER

Leaving a city because it left me

“I can’t live in a place where the definition of success is ‘I’m not drowning!’” Via Crosscut

“I can’t live in a place where the definition of success is ‘I’m not drowning!’” We’d been arguing, my partner and I, for months in that way that couples do when life stresses have been piled on so high that … Continue reading →

In New York City, these dancers are keeping the city’s legendary vogue scene on the map.

The trick to keeping your #NewYearsResolutions? Set the bar low. Here are 5 super reasonable goals for a better you in 2018. Via Rewire

If you need some inspiration for a resolution list of your own, here are some of our favorite "new habits" we learned more about in 2017.

Going out drinking for the Holidays? Remember to stay classy.

A bartender’s guide to getting cut off at the bar — with grace.

Imagine how many people could find relief if these were in every major city. (via World Economic Forum)

Need ideas for where to take your holiday visitors? Stop by the Mystery Coke Machine in Capitol Hill. #soSeattle

We'll continue to follow this story and bring you updates throughout the day.

Many colleges have launched food pantries to address food insecurity on campus. Does YOUR college offer a food assistance program for students? Let us know in the comments!

How a Southern chef set up shop in Seattle

When you think of cities known for southern cooking, you might think of Savannah, Georgia or Nashville, Tennessee. You wouldn’t think of Seattle. But

You don't have to break the bank in order to shop local. Via Rewire

It’s dominated headlines for weeks, but what does net neutrality really mean for the average person? And how are states fighting this week’s federal changes?

These bikes were made for Seattle

Do you use one of these bikes too?

Seattle’s new, more casual bike-share programs, Spin, LimeBike and Ofo, seem to have caught on. Their tangerine, green and yellow bikes began appearing all over town last summer, often at the end of customers’ rides. You can jump on one … Continue reading →

We first met Jessica in 2013 when Enrique Cerna was covering the Dream Act. Enrique has continued to cover her story in this shifting political climate. Here is what Jessica has to say in 2017: http://bit.ly/2yp11a4

"Young adults are dating long-distance to focus on their careers."

We've learned a lot this year about how people are falling in—and out—of love. Here are some of the most interesting relationship tidbits from 2017.

When you hear the name, "Don James," what adjective comes to mind?

WE/ME: What do Seattle Youth want for the Future of Our City?

What do Seattle youth want for the future of our city, and are city officials listening?
#ThrowbackThursday

Well this is new.

The regulations go into effect in 2019.

Set your electronics down and set a time for yourself. Rewire

The rise of smartphones could not have been predicted. And it happened before we asked ourselves—is this behavior healthy? Now digital addiction exists.

Your childhood dream of boarding on THE POLAR BEAR EXPRESS is here in Washington! All aboard everyone. 😀😊

All aboard The Polar Express! (via BestProducts.com)

Climate change is becoming more real, we all need to know and be aware.

If this starving polar bear doesn't convince you that climate change is a problem, nothing will

Seattle has a lot of problems, but nothing technology won’t fix, right? Amazon has transformed the city. The company’s founder, Jeff Bezos, is now the richest man in the world. We don’t lack for resources or innovations. One of those … Continue reading →

Bob Ross. The man, the myth, the legend. The hair. Minneapolis artist Leslie Barlow Art has always been a huge "The Joy of Painting" with Bob Ross fan. Watch as she paints "Christmas Eve Snow" along with the landscape master.

Be the first to know and let us send you an email when Spark Public posts news and promotions. Your email address will not be used for any other purpose, and you can unsubscribe at any time.

Send a message to Spark Public:

Depending on your personality, it can be tough opening up to new people once you’re in social situations. That's why the Grown-Up Club was started. More on why it's hard for adults to make friends at http://bit.ly/2uy3cqS.

Need ideas for where to take your holiday visitors? Stop by the Mystery Coke Machine in Capitol Hill. #soSeattle

Many colleges have launched food pantries to address food insecurity on campus. Does YOUR college offer a food assistance program for students? Let us know in the comments! South Seattle College

When you hear the name, "Don James," what adjective comes to mind? Washington Husky Football University of Washington #GoDawgs 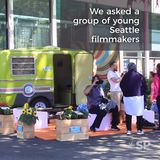 WE/ME: What do Seattle Youth want for the Future of Our City?

What do Seattle youth want for the future of our city, and are city officials listening? #ThrowbackThursday

Bob Ross. The man, the myth, the legend. The hair. Minneapolis artist Leslie Barlow Art has always been a huge "The Joy of Painting" with Bob Ross fan. Watch as she paints "Christmas Eve Snow" along with the landscape master. 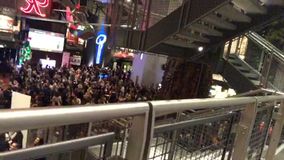 Skip the Gym and Try Taking an Acrobatics Class

Female Mayors are on the Rise

The November 2017 election brought in 12 women mayors, in greater Seattle alone! But as far as achieving gender equality in politics...we've still got work to do. Jenny Durkan for Seattle Center for American Women and Politics

FIVE boys sharing ONE house? Here's how these roomies are making it work. Matthew Koji Grega

We are hiring a Digital Content Production Intern! Gain first-hand experience with us! Hear from past interns about their experiences & apply today: http://bit.ly/2AS2rwl

"I had this preconception of Art--that in order to do art, you had to be good at art." Street art makes most people think of graffiti, but street instalation is more than just graffiti. Mows510 Via Rewire

Before we were Spark Public, we were What's Good 206. Here's a look back at a video produced by our former intern, Rhea Panela. #FlashbackFriday Definitely Filipino

Five guys. One house. How do you make it work? Our intern Matthew Koji Grega shares his tricks and tips for co-housing. University of Washington

Ever wonder about the make-up artists that turn people into zombies? Here is one such story. From Rewire #HappyHalloween!

Witchcraft seems to be having a moment, especially in the PNW. Just in time for halloween, we talked to three practicing witches and asked them to weigh in. The Hoodwitch #cunningcrowapothecary #witchPDX http://bit.ly/2zlklKb

Cohousing: Is it right for you?

If you're someone who thrives off of social interaction, perhaps Cohousing is right for you. From Rewire

Our current Miss Washington USA will soon pass on her crown. Here's a look back on Alex Carlson-Helo's difficult battle with #rheumatoidarthritis and her incredible journey to the Miss USA stage. #MissWashington2018

The Coming Out Diaries

Ocotber is #LGBThistorymonth, Rewire's web editor shares personal and funny blurbs from her old journals about her journey towards coming out.

Four Guys and a Spooky House

Meet three friends who are such super-fans of the movie 'The Ring' that they moved into the house where it was filmed. Todd Michael Jesse Stipek Dylan Stipek

I live in the Ring House

Would YOU live in a house where a scary movie was filmed? THESE GUYS DO! Meet 4 friends who took super-fandom to the next level by moving into the house where their favoirte horror movie was filmed. #TheRing Rings Movie #HappyHalloween Todd Michael Jesse Stipek Jen Germain

Pumpkin Pie in a Jar

No weekend plans? Satisfy your pumpkin cravings with this recipe. http://bit.ly/2geUlnG

"If the school didn't provide a food pantry, there'd be more days that I'd go without eating." HALF of all community college students are affected by food insecurity, according to Wisconsin HOPE Lab. Here's how one Seattle college is addressing hunger on campus. Learn more at SouthSeattleCollege.edu/StudentLife South Seattle College Seattle Colleges Phi Theta Kappa Honor Society International Delridge Grocery Cooperative

The Tough Transition out of Homelessness

"I had to stay at McDonald's.....or stay up and wander around downtown Renton." Terry Jackson found himself homeless at 15 when his mom lost her job, and their home. See the full story at http://bit.ly/2ksbq2T The Mockingbird Society

Washington relies on high sales tax more than any other state. Here's what's wrong with that: http://bit.ly/2xjxceK Stephen Hegg KCTS 9

Other Broadcasting & media production in Seattle

5 min away until our live stream with The Drunken Tenor!!
https://www.facebook.com/The-Blue-haired-toy-collector-840135526057244/?ref=page_internal
Love the new name and logo!