Our team is highly skilled in the performance side as well as the technical side of production and will walk the artists we work with through the entire process, from pre-production to post, and even help with marketing and getting their product seen.

We’re psyched to be ranked as a Top Video Production Company in New York City by Wimgo! Thank you Wimgo! 🙏

Our new short film Hidden Blatancies was accepted into the My Røde Reel Festival! Huge thank you to @rodemic for letting us be a part of this competition. Click this link to watch it and vote! : https://www.rode.com/myrodereel/watch/entry/8261

CHECK OUT THE FIRST EPISODE FOR @toofarwebshow !!!

Follow their page for more info/updates on the show!

Throwback to filming the trailer for @toofarwebshow , their FIRST EPISODE COMES OUT TOMORROW! Check out their page and @starrstreetmedia for more updates!

It’s rainy and cold in New York [for some reason], do like our buddy Rey and get cozy with the nearest Xbox Controller!

Testing out new lights 🙌Contact us for all your green screen needs!

“Tales from the Rabbit Hole” has been getting into some awesome festivals, come see it!

#throwback to last week at the Tribeca Film Festival, our co-founder @jean_crd got to participate through a cool opportunity via New York University!

"I can use this!"
Here's some cool gimbal movement from an upcoming short film @dvanceg shot.

Nothing but smiles on set!

Another throwback to when we went to the New York Toy Fair to meet with our friends at Disceez. Here's a pic of us with the Disceez CEO, Gene!

Had a blast filming @tabemononyc ‘s Tiny Desk Contest Submission for NPR. They killed it, check out their page for the full video! 👀 @npr

Had a blast filming Tabemono's Tiny Desk Contest Submission for NPR. They killed it! 👀 @npr

Here’s our latest commercial for our friends over at @disceez for their new pizza disc! We had a great time slinging the discee inside the pizza place. Definitely worth the purchase 👌

Here’s our latest commercial for our friends over at @disceez for their new pizza disc! We had a great time slinging the discee inside the pizza place. Definitely worth the purchase 👌

Had a blast last night at the world premiere of “Tales from the Rabbit Hole: A Curious Kitsch Novel” at the SAG-AFTRA Foundation Robin Williams Center in NYC. The film was written and produced by @sofiamirpuri and @tiagodurao // Associate Produced by Starr Street Media. So excited for the future of the film. More details to come later.....

Look at the difference color correction and color grading does to your image!

In Fear Of Solitude: A Review Of Orphans

Check out Sara Margolis's review of Orphans, playing at the Access Theater in NYC, Saturday and Sunday at 8 PM

Renee Gagner’s production of Orphans tells a tale of loneliness, and what it does to a person who is thrust into it at a young age. The actors had the audie...

Our long-time friend, Cameron Bell, features in Orphans! It opens on Jan 24th and we highly suggest getting tickets now before they sell out!

Ilandria's new visual for their single "Let Me Stay Awake" is out now! Starring the EDM duo Ilandria, the video was produced and filmed by Starr Street Media, with make-up by Sara Margolis and concept by Ilandria. Check it out below!
https://youtu.be/Cyx0RBBrfoc

Ilandria just released its newest single, Let Me Stay Awake! Keep an eye out for the music video, coming soon!

Let Me Stay Awake, an album by Ilandria on Spotify

"zounds!" an original play written by Veronika Gribanova and Directed my Kevin Mejia is set to premier on November 30th! Tickets and Information can be found...

YO - we're releasing a brand new single on November 30th.
Jae Luna sang on it, it's called Motion Pictures, and you can hear us play it for the first time live at Strange Fest w/ The Living Strange, Better Head, Cherry & more.

In post-production for a new feature film coming soon!

Floor Five Theatre Co. has an original production coming out at the end of November! Go to their page for more details! Tickets and the Facebook event can be found in Derrick's review as well!

Smoke, gold, and denial filled Atlantic Acting School’s underground theatre as their C5 students took the stage in their beautiful production of “The Visit”

Short films,webseries, music videos!! We do it all, and for an awesome price. Message us to get your project produced!
💡📽🎬

Atlantic Acting School C5’s production of Big Love by Charles Mee includes nothing short of runaway brides with fear in their hearts and blood on their hands.

From now until November 18th we are offering 1 hour headshot session and 6 edited photos FOR ONLY $100!!

You can do your own makeup or leave it up to our on-site makeup artists.

Message us to schedule your shoot!!

Be the first to know and let us send you an email when Starr Street Media posts news and promotions. Your email address will not be used for any other purpose, and you can unsubscribe at any time. 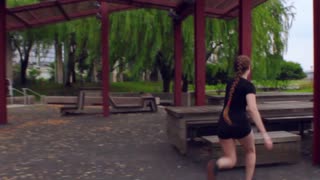 [NSFW] Sitcoms be like. You can also watch it on YouTube along with the rest of our videos at https://www.youtube.com/channel/UCqy_0DiWCYUCcEKl_FrPjOQ

Congratulations to Ilandria on their first live performance! Excited for many more to come!

Great time on the set of Ilandria's new Music Video, "I Don't Belong Here," coming out on May 20th!

A Starr is Born

Founded by Derrick Gallegos and Jean Franco, Starr Street Media started out as an outlet for them to experiment with their art. Having both come from the Atlantic Acting School in New York City, they were encouraged to make their own work, which led them to work toward creating their first web-series, Boroughs. While, due to lack of experience, Boroughs was never completed, it was an excellent learning experience for the duo. They decided to scrap the series and work on smaller projects.